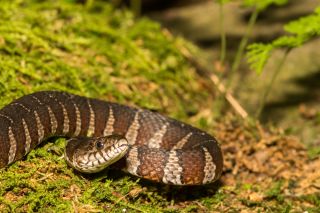 Northern water snakes are one of the most common types of water snake.
(Image: © Jay Ondreicka | Shutterstock)

Water snakes are non-venomous snakes found in North America that, true to their name, like to spend time in or around water. Water snakes are often confused with water moccasin snakes (also called cottonmouths), which are venomous with a dangerous bite. Inability to tell the two species apart has led to the death of many harmless water snakes.

Water snakes and water moccasins are from two different families (respectively, Colubridae, the largest snake family; and Viperidae, or vipers), but they look superficially similar, according to Bill Heyborne, a herpetologist and professor of biology at Southern Utah University. “The similarity may be an evolutionary adaptation of the water snakes to avoid predation.”

One good way to tell them apart is by their heads and necks. “Water moccasins tend to have blocky, heavy heads, and thick stocky bodies for their length,” he said. “They also tend to have a more distinctive neck.” In contrast, “water snakes have a narrower, rounder head, a longer, more slender body and a less distinctive neck,” said Heyborne. Water snakes do not have any heat-sensitive pits on their faces, while water moccasins do, but getting close enough to a snake to determine the presence of pits is dangerous.

“If you are unsure, it is best to leave snakes alone and not risk getting them confused,” said Heyborne.

The markings and coloration of water snakes vary somewhat from species to species, but for the most part they are brown, gray, olive green or reddish with dark splotches or bands on their backs. Sometimes they look solid brown or black when wet.

Water snake scales are keeled; they have a raised ridge down the center, making them rough to the touch. The pupils in their eyes are round.

Females are heavier and longer than males, and grow much faster, according to an article in the journal Ecological Monographs. Water snakes can grow large, with the northern water snake reaching lengths of nearly 5 feet (1.5 meters) and other species averaging around 3 feet (1 m).

Water snakes are abundant in the southern and eastern United States, according to watersnake.net. They are one of the most frequently encountered snakes in places like Florida, Georgia, the Carolinas, Alabama, Arkansas and Mississippi. Some species of water snake are found in the Midwest and Western United States as well, in places like Illinois, Iowa and California.

According to the University of Michigan’s Animal Diversity Web& (ADW), water snakes are happy to dwell near any type of significant water source, such as rivers, lakes, ponds and marshes, though they prefer relatively quiet waters. They like to bask in the sun so seek areas that are not overly shaded. When they’re done with the sun, water snakes take refuge under flat rocks and logs.

Water snakes spend a lot of time swimming or basking in shallows, but they also venture on land and climb trees. Still, they never stray far from a water source.

Heyborne noted that water snakes are known to be aggressive. “When handled, they tend to hiss or bite as a defense,” he said. For this reason, they do not make good pets. They sometimes become aggressive when approached, even if they are not touched.

Water snakes often climb trees and rest on the branches above the water. If disturbed, they will drop down into the water. They tend to be solitary animals and are primary diurnal, though they sometimes hunt at night as well. They hibernate in the winter and are social immediately before and after hibernation. At this time, groups may bask together, according to the ADW.

Water snakes produce a musky secretion from glands near their tail, said Heyborne, which can be expelled if they feel threatened. Water snakes have also been known to defecate and vomit when threatened or agitated.

Water snakes tend to feed in or near water, Heyborne said. “Common prey include fish and amphibians (frogs, toads and salamanders).” They prefer slow-moving fish. According to a study published in the journal Ecology, once water snakes reach about 1.5 feet (45 cm) in length, their food preference changes from fish to frogs and other larger animals like salamanders and toads. Smaller water snakes will maintain their primarily fish diet.

Water snakes swallow their prey alive. In shallow waters, they wait with their mouths open wide for prey to pass by, and then they snap their jaws around it. They also search for prey on the lake or river bottom, investigating under rocks, branches and in crevices for hiding prey, according to an article on aquatic snake foraging in Behaviour journal.

“Recent research indicates that at least some species of water snake produce venom-like proteins in their saliva,” said Heyborne. One type of protein is an anti-coagulant, which makes wounds bleed more profusely. If the prey escapes, the water snake can follow its train of blood. “Although these pose little risk to large animals such as humans, to their small-bodied prey, these proteins may present a significant threat,” said Heyborne.

According to an article in the Journal of Herpetology, male water snakes reach sexual maturity around 21 months, while females reach it around 3 years. Females breed each year, giving birth to a litter of around 20 live snakes. Water snakes are ovoviviparous, which means that eggs incubate inside the mother’s body. Litters of up to 100 have been reported in large snakes, according to the ADW.

Mating season for water snakes is in the spring. Males pursue females. The male approaches the female and rubs his chin along her back with occasional spasms before bringing their cloacal openings together. Usually only one male mates with a female per season, though occasionally two do, according to "A Guide to Amphibians and Reptiles" (Stokes, 1990), by Thomas F. Tyning.

Females gestate for three to five months. Babies are around a foot long and are independent as soon as they’re born.

Water snakes are of the subfamily Natricinae and are related to garter snakes. There are 10 species of water snakes, according to the Integrated Taxonomic Information System (ITIS).

The taxonomy of water snakes is:

Here are some commonly encountered or particularly fascinating species and subspecies:

Northern water snakes are one of the most common types of water snake. As their name implies, they live in the Northeastern United States and southern Ontario, though their range extends south to Mississippi and Georgia and as far west as Kansas. They are among the largest of water snakes, with females reaching nearly 5 feet (1.5 meters).

According to Tyning, Northern water snakes sometimes herd fish or tadpoles to the water’s edge, where they feed on many at a time.

These medium-sized snakes are found in the Southeastern coastal United States, from Alabama to North Carolina. They range from reddish or light brown to black and have dark crossbands, according to the Savannah River Ecology Laboratory (SREL). Their crossbands are wide across the middle of the back and narrower on the sides. The snakes darken as they age, sometimes making the crossbands harder to see. Banded water snakes have square markings on the sides of their bellies and a dark stripe from their eyes to their jaws.

Like banded water snakes, brown water snakes are found along the Southeastern United States’ coastal plain from the Carolinas to Alabama. They can be large snakes, with females reaching lengths of 5 feet (1.5 m). Males can be as small as 2.5 feet (76 centimeters). According to the ADW, brown water snakes have a distinctive wide head that resembles a diamond when viewed from above. This, combined with their high-set eyes makes them commonly confused with water moccasins and rattlesnakes.

As their name suggests, brown water snakes are brown in color. Usually they are light to medium brown with dark brown, square splotches along their backs and sides. Some have a base color so dark that the splotches are barely visible. They have yellow or brown bellies with square and black crescent markings.

Yellow-bellied water snakes are medium-size, with females reaching about 4 feet (1.2 m) in length.

Yellow-bellied water snakes live primarily in the Gulf Coast region, with a range extending from Georgia to Texas to southern Iowa.

This is another subspecies of plain-bellied water snake. As their name suggests, their undersides are red-hued, ranging from bright orange to yellow-red. The red-bellied’s cousin, the copper-bellied water snake (Nerodia erythrogaster neglecta), has a darker red underside. Red-bellied water snakes have brown or gray backs that are mostly unmarked, according to the Virginia Herpetological Society. Juveniles, however, have distinctive patterns.

Red-bellied water snakes spend more time on land than most other species of water snakes, according to the Savannah River Ecology Laboratory. They are often seen crossing roads and generally flee to the land if they are threatened, unlike other water snakes.

According to the U.S. Fish and Wildlife Service, this once-threatened subspecies of the Northern water snake is now thriving in its habitat on the rocky shores and islands of Lake Erie. The Lake Erie water snake is a soft gray color with partial band patterns. It is a medium-size snake, with females reaching around 3.5 feet (1 m) in length.

Its diet has changed since the introduction of the round goby fish in the 1990s. Today, the Lake Erie water snake’s diet is 90 percent invasive goby fish and 10 percent native fish.

Most types of water snakes are not endangered, according to the International Union for Conservation of Nature (IUCN). However, two species are on the IUCN's Red List of Threatened Species.

The Brazos River water snake (Nerodia harteri) and the Concho water snake (Nerodia paucimaculata) are listed as Near Threatened because their respective ranges are limited to about 1,900 square miles (5,000 square kilometers) in north-central Texas. However, their populations are thought to be stable. The U.S. Fish and Wildlife Service (USFWS) delisted the Concho water snake from the Endangered Species List in 2011 because its population had grown to "viable" levels.

The USFWS lists the copper-bellied water snake (Nerodia erythrogaster neglecta) as threatened, meaning it will likely become endangered in the near future. There are only about 200 snakes remaining in its northern population segment in southern Michigan, northeastern Indiana and northwestern Ohio.