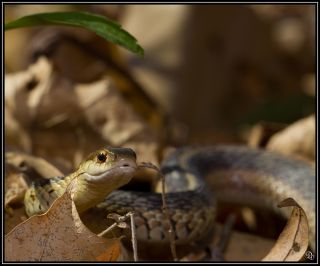 It's no secret that snakes shed their skin. Here, a common garter snake mugs for the camera.
(Image: © David Duneau)

Garter snakes are among the most common snakes in North America, with a range spanning from Canada to Florida. Often kept as pets, they are relatively harmless, although some species do possess a mild neurotoxic venom. However, it is not dangerous to humans.

Where did the garter snake get its funny name? According to Doug Wechsler, a wildlife biologist at the Academy of Natural Sciences of Drexel University in Philadelphia and author of "Garter Snakes" (Powerkids, 2001), their stripes resemble garters men used to wear to hold up their socks. Another theory is that it is a corruption of the German word for “garden.” Garter snakes are sometimes erroneously called "garden snakes."

Garter snakes come in a wide variety of colors depending on the species, but “most have three longitudinal stripes — one in the center of the back and one on each lower side of the body," according to herpetologist Jeff Beane, collections manager of amphibians and reptiles at the North Carolina Museum of Natural Sciences. "In most species, the stripes are yellowish or greenish, but this varies with species and region.”

Some garter snakes have intricate splotchy patterns between their stripes, making them look checkered. And their appearance really does depend on the species — Beane pointed out that some garter snakes are “virtually stripeless.”

Garter snakes are relatively small, usually between 23 and 30 inches (58 and 76 centimeters), though sometimes growing as long as 5 feet (1.5 meters). Beane described them as “slender to moderately stout-bodied ... [with scales that are] obviously keeled,” meaning they have a ridge down the center. He added that many species of garter snakes have two-colored tongues.

Beane described garter snakes as "generalists, inhabiting a wide variety of habitats." They live in woodlands, meadows and grassy knolls and like to be near water, especially "in the arid parts of the West," Beane said.

The common garter snake occurs throughout North America, from the Atlantic Ocean to the Pacific Ocean and into southern Canada, according to the Virtual Nature Trail at Pennsylvania State University New Kensington.

The garter snake is abundant in the eastern United States; it is the state reptile of Massachusetts.While no snakes are known to be native of Alaska, a road-killed specimen of a garter snake was found near Haines, Alaska, in 2005, according to an article in the Journal of Herpetology. Researchers who identified the snake through mitochondrial DNA concluded that the single snake represented a relict, or remnant, population, a recent natural colonization or a fresh introduction.

Garter snakes are generally active during the day. Beane described them as “relatively fast-moving [and] highly terrestrial, but [some] may climb into shrubs or vines; some species climb more than others.” Wildscreen’s ARKive Initiative pointed out that some species are also excellent swimmers.

When threatened, garter snakes give off a bad-smelling musk. Because of their small size, garter snakes have many predators, including hawks, crows, bears, bullfrogs, snapping turtles, foxes, squirrels and raccoons, according to the Animal Diversity Web (ADW), a database maintained by the University of Michigan's Museum of Zoology.

Beane said that garter snakes “feed mostly on fishes, amphibians, and earthworms; other prey are occasionally taken.” The snakes immobilize their prey with their sharp teeth and quick reflexes. The saliva of some species contains a  mild neurotoxin that causes paralysis, making small prey easier to swallow. Like other snakes, garter snakes swallow their food whole, according to the ADW. Beane said “some larger prey may be dragged and chewed until killed by trauma.”

While most species are classified as harmless (non-venomous), their bite can cause minor swelling or itching in humans, and anyone bitten by a garter snake should clean the bite thoroughly. It is not ultimately a cause for concern. Allergic reactions to the saliva have been known, but cases are extremely rare, according to the ADW.

According to Beane, the best situations for mating are “when they emerge [from hibernation] in the spring and also when they congregate again in fall ... because they are already gathered together for hibernation and do not have to waste energy seeking mates.” But for garter snakes in more temperate areas where they don’t hibernate, the snakes rely on pheromones.

Female garter snakes give off pheromones to attract males. Dozens of males will come to one female, which is why homeowners sometimes think garter snakes are overrunning their neighborhoods. According to the biology department at Reed College, this mass of mating snakes is called a “mating ball.”

Some males use trickery to confuse their competition, according to Reed College. They will secrete female pheromones to lure other males toward them rather than to the female. After the other males are away from the mating ball, the males posing as females will dart back to the female to attempt to mate. [Related: Estrogen Turns Male Snakes Into Same-Sex Charmers]

Garter snakes are ovoviviparous, meaning they bear live young. After mating, females store sperm in their bodies until they want to fertilize their eggs. Garter snakes give birth to 20 to 40 live young at a time, though Beane pointed out that litter sizes can vary greatly. “As few as five and as many as 101 have been reported,” he said. Parent snakes do not care for their young.

Thamnophis sirtalis (common garter snake): The common garter snake has the largest range, occurring in most of the continental United States with several subspecies, according to Beane. They are found everywhere from Alaska to Florida, though they do not live in the Southwest. Common garter snakes usually have three white, yellow, blue, or green stripes running the lengths of their brown or olive bodies. Their heads are darker than their bodies.

Thamnophis sirtalis sirtalis (Eastern garter snake): This subspecies of common garter snake is typical throughout the eastern United States. Though its body color may vary from brown to green, it almost always has three yellowish stripes on its back, according to the Savannah River Ecology Laboratory. Sometimes its body is splotchy, giving it a checked appearance. Eastern garter snakes in Georgia and Florida sometimes have bluish coloring.

Thamnophis sirtalis parietalis (red-sided garter snake): This California subspecies of common garter snake can be stunning. Blue or yellow stripes pop against the dark olive or black body, and red bars line the sides of the body. The red-sided garter snake has a red or orange head and a blue underside. North of the San Francisco Bay Area, the underside is sometimes a brilliant bright blue. Its eyes are larger than other garter snake species. According to California Herps, it is able to eat Pacific newts, which are poisonous to other predators.

Thamnophis marcianus (Checkered garter snake): This small, southwestern snake has a dark checkered pattern over its entire body, plus three thin light-colored stripes, according to Herps of Texas. It is rarely longer than 2 feet.

Thamnophis sirtalis annectens (Texas garter snake): This common garter snake subspecies primarily resides in the Lone Star State, though according to Wildlife North America, there is a population in Kansas. It has a dark colored back with a bright red stripe down its center and two light-colored stripes on its sides.

The International Union for the Conservation of Nature's Red List of Threatened Species lists common garter snakes as "least concern" for threat of extinction, noting their wide range and population size, estimated to be more than 1 million adults in the wild.

The U.S. Fish and Wildlife Service lists the San Francisco garter snake is listed as "endangered" because it is threatened by habitat loss and over-collection.