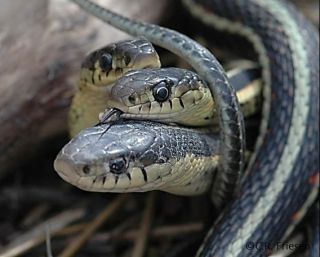 A male garter snake flicks its tongue on another snake in order to detect pheromones and determine whether or not it's a female.
(Image: © Oregon State University)

Give a male garter snake a taste of estrogen and watch out, as the hormone turns these lads into the sexiest thing on the block, attracting dozens of other males eager to mate.

The finding, published in the Journal of Experimental Biology, has implications for understanding the environmental impact of compounds that mimic the effect of estrogen, found in some chemicals and pesticides.

Estrogen, the researchers found, is key to a female's release of pheromones and thus, reproduction.

Here's how it works: For the red-sided garter snake, picking up a mate takes but a second and a flick of the tongue. When a male detects a possible mate nearby, he licks the female with a quick flick of his tongue. The chemical cues, called pheromones, exuded by the females are so strong it takes but an instant, the researchers say, for the male to determine the other snake's species, sex, population, reproduction condition, size and age. In fact, the males are totally dependent on these pheromones for snake reproduction.

Every spring, tens of thousands of these garter snakes emerge from their limestone caves north of Manitoba, Canada, for mating. Intense competition ensues, as males swarm (and tongue) female snakes in an effort to be the first to mate with her. The frenzy appears as twisting balls of snakes called mating balls.

The males tend to choose the larger, more mature gals, because these females can produce more babies; they also have a slightly different chemical signature in their pheromones. While young, small females do get action, they aren't the preferred mates.

Once they mate, the females emit a different pheromone, confirming "no more sex," causing other males to lose interest and leave the area.

In the new study, the researchers implanted male garter snakes in their natural environment, each with a capsule that raised their estrogen levels to approximately match those of female snakes. After one year of these estrogen supplements, the male snakes started secreting a pheromone that seemed to cause other males to swarm to them, forming clumps of writhing snakes tangled together. Apparently, the estrogen caused the males to secrete "female" pheromones.

"We thought this might work, but we were surprised the results were so compelling," study researcher Robert Mason, a professor of zoology at Oregon State University, said in a statement. "The amount of estrogen the male snakes received was nothing unusual, just about what a normal female would produce."

The other males, in fact, preferred the male snakes with boosted estrogen levels to the small female snakes, the researchers found.

When the researchers stopped giving the males estrogen, they reverted back to their normal behaviors.

This work was supported by the National Science Foundation and the U.S. Environmental Protection Agency.