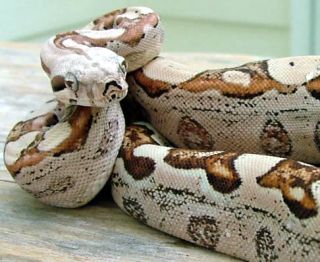 This boa constrictor is the result of a "virgin birth" in which its mama reproduced without a male in a phenomenon called parthenogenesis.
(Image: © Warren Booth.)

For the first time, scientists have discovered a boa constrictor that reproduces by virgin birth.

Intriguingly, these giant female serpents only gave birth in this fatherless manner in years when males were present, researchers added.

Asexual reproduction is common among invertebrates (animals without backbones), and is rare in vertebrates, but not unknown. For instance, the komodo dragon, the world's largest living lizard, has given birth via parthenogenesis, in which an unfertilized egg develops to maturity.

Scientists investigated a female boa constrictor at the Boa Store in Sneedville, Tenn., an online store that sells captive-bred boa constrictors. The female had given birth to litters of young this year and last. These offspring were all female and, unusually, were all caramel in color like their mother. This rare trait is recessive in nature, meaning it gets expressed only if offspring receive the DNA for it from both their parents, and none of the males that the female had been exposed to were known to carry the trait.

Genetic tests revealed that none of these litters carried any genes from any of the males their mother had known. The baby snakes must have been fatherless, the first time parthenogenesis has been seen in boas.

"It's perplexing that males were present with the female in years that she produced these parthenogenetic offspring, and in years when they were absent she did not," said researcher Warren Booth, a population and evolutionary geneticist at North Carolina State University at Raleigh. "Instances of parthenogenesis, or virgin birth, are often attributed to a lack of mates. Therefore, in cases where males are not present, the female would be better to produce parthenogenetic babies than none at all.

boas (and many other creatures) carry out meiosis, in which cells divide to form the respective sex cells, each of which only possess half the material needed to make offspring. For the female boa, pairs of her sex cells likely fused to generate embryos.

The results were offspring with just mom's genetic material. However, the babies weren't clones of the mother since they were made using identical halves of her genome. [Image of offspring]

Just as unusual as the one-parent reproduction were the offspring's chromosomes. In all snakes (and in a number of other reptiles), males generally occur when the sex chromosomes are the same, ZZ, while females typically result when they are different, ZW. (This is the opposite of humans, where males have dissimilar sex chromosomes, XY, and females have the same, XX.)

Scientists have seen snakes produce ZZ males and ZW females via parthenogenesis before, but all the fatherless offspring seen with this boa were WW females, "upending decades of scientific theory that state WW embryos will not develop," Booth told LiveScience. (Their mother was a ZW female.)

"The main question here is just how common is this in other reptilian and even avian lineages," Booth said. "I have samples from a number of other boa constrictor litters that suggest parthenogenesis was involved, and two additional species within the family Boidae."

These findings could impact conservation of rare snakes, and not in a good way.

"If these female offspring themselves can reproduce parthenogenetically, then over time, deleterious mutations that may arise will be inherited by the subsequent offspring in the homozygous form — basically, each offspring will have two copies of the harmful gene," Booth explained. "As the number of generations increase[s], so does the likelihood of further mutations arising."

"Essentially, what is occurring here is an extreme form of inbreeding," he added. "Being half-clones of the mother, they are losing a significant amount of genetic diversity. It has been shown that populations of many species exhibiting reduced genetic diversity are often more prone to physical and physiological defects that reduce an individual's fitness and their chance of reproduction. Any conservation strategies regarding boas and related snakes need to insure that carefully genetic monitoring of reproductive events are made."

It remains unknown whether boas could produce generation upon generation of snakes via virgin birth.

"It would be incredible if we were able to prove that parthenogenesis is a heritable trait," Booth said. "That being said, I do not think anybody has anything to fear. Parthenogenetic boas are not going to overrun the world."

The scientists detailed their findings online Nov. 3 in the journal Biology Letters.