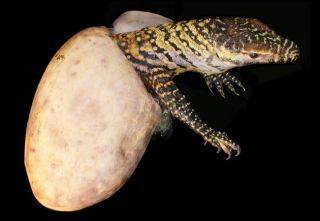 Maybe females could live without males, at least for Komodo dragons. These behemoths of the reptile world can produce babies without fertilization by a male, scientists recently discovered.

Currently at London's Chester Zoo, one mother-to-be named Flora [image] is waiting for her eight offspring to hatch, each one the result of a process called parthenogenesis--or a virgin conception.

"Parthenogenesis has never been documented in Komodo dragons before now, so this is absolutely a world first," said co-researcher Kevin Buley of Chester Zoo.

Parthenogenesis, in which an unfertilized egg develops to maturity, has been found in 70 species of vertebrates, including captive snakes and a monitor lizard species. In most of these reptile cases, this process is their only method of reproduction.

In some whiptail lizards, males have become somewhat of an accessory, and all individuals are female. The type of asexual reproduction in whiptail lizards generates all-female offspring.

The Komodo dragon, turns out, can do both: they can reproduce sexually or asexually depending on their environmental conditions. At most zoos, females live alone and are kept separate from other dragons.

In May of this year, Flora laid 25 eggs, of which 11 were viable. The zookeepers knew Flora had played both mom and pop as soon as they confirmed her eggs were fertile. That's because Flora had never come into contact with a male dragon while at the zoo.

Three of the developing eggs collapsed during incubation, providing embryonic material for testing this theory. The zoo staff worked with Phillip Watts of Liverpool University to carry out genetic analysis of the collapsed eggs.

"This paternity test confirmed that all the genetic material in the eggs had come from Flora and that she was indeed both the mother and the father of the developing eggs," Buley told LiveScience.

Both males and females carry out meiosis in which cells divide to form the respective sex cells, sperm or egg. In females, meiosis produces four egg-progenitor cells, one of which becomes the egg while the other three typically get reabsorbed by the female's body. For Flora, one of the extra cells acted like a surrogate sperm and fertilized the egg cell, explained Buley.

The one-parent event resulted in offspring containing the same genetic material as their mother. Flora's infant dragons will not be her clones, however, because there is genetic shuffling going on during the egg production stage, Buley said.

For instance, not all copies of genes are identical and each gene has an alternate form. If a person has two "alleles" for blond hair she would show a head of sunny hair, but if one allele was for blond and the other for dark brown, the person could show up a brunette. The same shuffling process occurred in the Komodo dragon babies.

With the ability to reproduce without male mates, Komodo females could potentially found an entirely new colony on their own. "Theoretically, a female Komodo dragon in the wild could swim to a new island and then lay a fertile clutch of eggs," Buley said.

The downside is that all hatchlings resulting from this type of parthenogenesis are males. "These would grow up to mate with their own mother and therefore, within one generation, there would potentially be a population able to reproduce normally on the new island," Buley explained.

In the long-term this Oedipus-like practice could lead to health problems associated with inbreeding, as the entire colony would have such low genetic diversity.

The results also have implications for captive-breeding programs that have sprouted to ensure the survival of the threatened lizards. Fewer than 4,000 Komodo dragons are thought to remain in the wild, residing on just three islands in Indonesia.

Scientists wonder if the act of keeping males and females separate could cause them to switch from sexual to asexual reproduction, which could lead to decreased genetic diversity. ?

The discovery is detailed in the Dec. 21 issue of the journal Nature.