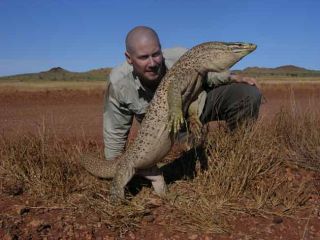 Scientists have known of just two living venomous lizards: the Gila monster and the Mexican beaded lizard. Turns out there may be more than 1,500 of them.

The discovery, reported this week by the journal Nature, alters thinking on the origins of venom.

But after comparing the genetic code for snake and lizard venom, Bryan Fry at the University of Melbourne, Australia discovered that the two reptiles shared nine toxins. This supports the idea that snakes and venomous lizards evolved from a common venomous ancestor, and after connecting the DNA dots, Fry and his colleagues traced venom to a single origin 200 million years ago.

"That's also when the small, bite-sized animals were starting to exist. Any time there's a new food source you see the emergence of a new predatory trick," Fry told LiveScience. "In this case, venom was the new trick."

The common ancestor had venom glands on both its upper and lower jaws. Since then, snakes have evolved to having glands on just their upper jaw – glands on the lower would make it difficult to swallow prey.

Iguanas stuck with the primitive configuration – glands on the top and bottom – but other lizards, like the Gila monster and the Komodo dragon, developed glands only on their lower jaw.

"They're like two pieces of macaroni on either side of the jaw with hoses leading to the teeth," Fry said.

Bacteria has long been blamed as the aggravating agent in a Komodo dragon's nasty bite. Fry now suspects otherwise.

"Bacteria couldn't work this quickly," he said. "The effects are totally inconsistent with bacteria."

The effects – a drop in blood pressure, loss of clotting ability, amplified pain, and loss of consciousness – are more biologically consistent with venom.

Although lizard venom is just as strong as that of many snakes, it's not as much of a concern to humans. Snake bites send a much more concentrated dose of venom directly into a victim's bloodstream.

A lizard's venom delivery system is less effective. They swish the venom around in their mouths with saliva and mucus, diluting it and making it less acute.

"Lizard venom is for capturing small prey," Fry said. "From a human aspect, danger is low. But if you're a 20-gram mouse, you're in trouble."