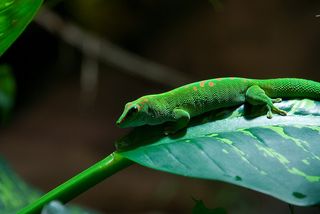 Geckos are a type of lizard. Though there are about 1,500 species of geckos, they all have some similarities, including amazing tails, a simple diet and hairy skin.

One thing they don't have in common is size. Geckos come in a wide range of sizes. The smallest gecko (and the smallest lizard) is the tiny dwarf gecko. It grows to miniscule 0.6 inches (1.6 centimeters) long and weighs around .0042 ounces (120 milligrams). Rhacodactylus leachianus leachianus, a subspecies of the New Caledonian giant gecko, is one of the largest gecko in the world, according to Reptiles Magazine. It can grow to 14 to 17 inches (35.5 to 43 cm), including the tail, and weighs 7 to 10 oz. (212 to 279 grams).

Geckos are found on every continent except Antarctica, and live in almost every habitat, including rain forests, deserts and mountains, according to National Geographic.

The majority of geckos are nocturnal. This means they are awake at night and sleep during the day.

Taking a bath is an interesting non-chore for geckos. Geckos have skin covered with hundreds of thousands of hair-like spines. These spines trap air and cause water to bounce off, according to a study published in Interface, the Journal of the Royal Society.

"If you have seen how drops of water roll off a car after it is waxed, or off a couch that's had protective spray used on it, you've seen the process happening," Lin Schwarzkopf, a professor of vertebrate ecology at James Cook University in Australia and one of the researchers on the study said. "The wax and spray make the surface very bumpy at micro and nano levels, and the water droplets remain as little balls, which roll easily and come off with gravity or even a slight wind." [6 Crazy Skills That Prove Geckos Are Amazing]

With this built-in water defense, one would think it would be hard to get clean. When the water bounces off, though, it takes dust and other contaminates on the skin with it. In addition, they clean their clear eyelids or eyelid-less eyes with a quick lick of the tongue.

Geckos typically eat fruits, insects and flower nectar. A gecko's tail saves fat that can be used later on when food is scarce.

Geckos give birth by laying eggs. The female can be pregnant with her eggs for years before she lays them. For example, the harlequin geckos' pregnancy lasts three to four years. When the eggs are ready, a gecko lays her eggs in leaves and bark.

The newly emerged babies are called hatchlings. Some hatchlings are quite big, for lizards. For example, leopard gecko hatchlings can be 3 to 4 inches (8 to 10 cm) long.

Here is the classification of geckos, according to the Integrated Taxonomic Information System (ITIS):

Geckos are listed anywhere from least concern to endangered, depending on the species, according to the International Union for Conservation of Nature (IUCN) Red List. For example, the Bavayia goroensis is endangered. It is only found in two locations in New Caledonia, an archipelago in the South Pacific, and the population is decreasing as the expansion of mining activities reduces its habitat.

Another example is the Bavayia ornata. It is also only found in two locations in New Caledonia, but there is no known data on how many are left or if the population is increasing. Its habitat is also shrinking due to mining and agriculture.

Geckos have score lines on their tails that allow them to snap off quickly if a predator grabs them. They then regenerate their tail.

These lizards have sticky feet that allows them to climb up slick surfaces. Their toes have microscopic hairs called setae that give them this sticky ability.

According to a study published in the journal the Proceedings of the National Academy of Sciences, when a gecko falls, it twists its tail to a right angle to enable it to land on its feet. This stunt takes 100 milliseconds. [Video: Geckos’ Talented Tails]

A gecko has been the mascot of the Geico insurance company since 1999. According to Geico, the idea for a gecko was inspired by a mispronunciation of the company's name. While the company does not say what species of gecko the mascot is, according to Reptiles magazine, it appears to be modeled after a species of the genus Phelsuma and is probably a giant day gecko (Phelsuma madagascariensis grandis).