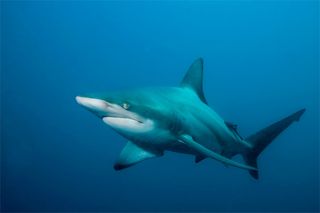 Atlantic blacktip sharks are known to breach out of the water while feeding, sometimes spinning a few times around their axis. The spinning breach could help the sharks vertically attack fish below as they plunge back into the water.
(Image: © Matthew D. Potenski, MDP Photography.)

An Atlantic blacktip shark named Tidbit showed no signs of being pregnant, and she hadn't even mated. So scientists were surprised during an autopsy of the now deceased shark to find she had been carrying a baby.

That's the second reported case of virgin pregnancy in sharks.

(The first so-called virgin birth was discovered last May, when a female hammerhead that resided at a Nebraska zoo gave birth to a single pup despite no contact with any male sharks for at least three years.) Then came Tidbit. “We have never observed her in reproductive behavior or showing typical signs of having been bred,” said researcher Beth Firchau of the Virginia Aquarium where Tidbit had lived for eight years since shortly after her birth in the wild.

Sharks generally change their eating behaviors when pregnant, and the females typically show bite marks and other physical signs from a violent mating session.

“There were no male blacktips in the tank for the past eight years," Firchau added. Atlantic blacktips, Carcharhinus limbatus, get their name from distinctive black markings on their fin tips and are the most common shark species found inshore off the coast of Florida.

Both discoveries suggest more to come.

"I think this is something that fundamentally many female sharks can probably do," said researcher Demian Chapman, a shark scientist of the Institute for Ocean Conservation Science at Stony Brook University in New York.

Chapman used genetic testing to confirm the shark pup that had been developing inside Tidbit contained only DNA from its mom, Tidbit.

Tidbit and the hammerhead are two of at least 70 vertebrate species, including Komodo dragons and captive snakes, that can carry out this type of reproduction, in which an unfertilized egg develops to maturity without any sperm.

Called automictic parthenogenesis, this virgin-birth process begins with egg production. Both males and females carry out meiosis in which cells divide to form the respective sex cells, sperm or egg. In females, meiosis produces four egg-progenitor cells, one of which becomes the egg. The other three typically get reabsorbed by the female's body. For Tidbit, one of the extra cells acted like a surrogate sperm and fertilized the egg cell.

The egg carries half of the mother's genes, which are tucked inside of thread-like packets called chromosomes. Typically, mom's chromosome set gets paired with dad's set, which are contained in the sperm.

And so a one-gal show leads to offspring with genetic material only from the mother. Not only that, the shark pup had only half the genetic diversity of its mom, Chapman said. That's because they didn't get a dollop of sperm, which contain a set of the father's chromosomes.

Down side to being single

Even though these sharks don't seem to need a male around to make babies, they shouldn't ditch sexual reproduction altogether, Chapman said. For one, the blacktip and hammerhead sharks that reproduced without mating only produced one pup, rather than an entire litter.

A female blacktip could produce five or six eggs at once. If she mated with a male, all or most of the eggs would be fertilized and develop into offspring, Chapman said.

"What happens with parthenogenesis, it seems if you leave eggs alone there is some probability that they will develop on their own," Chapman told LiveScience. He added that the probability of this happening must be low, because in the cases of Tidbit and the hammerhead shark only one of the eggs self-fertilized.

In addition, Chapman warned that pups born to such a parent could suffer from weakened immune systems, because the fertilized eggs have less genetic diversity than those of pups born to two parents.

With an arsenal of varied genes to fight illness, an organism has a better chance of carrying the right weapon when a disease does hit. With fewer types of disease-fighting genes, offspring could be ill-equipped for battle.

The results of the new shark discovery will be published today in the Journal of Fish Biology.