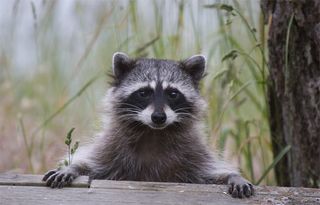 Raccoons are very adaptable, so they live in a wide range of climates and habitats.
(Image: © Dreamstime.)

Raccoons are round, fuzzy creatures with bushy tails and a black mask of fur that covers their eye area. These animals may look like cute, cuddly bandits, but they can be quite fearsome when approached.

Raccoons are found in North and Central America, Europe and Japan. They are very adaptable, so they live in a wide range of climates and habitats. They typically make homes, called dens, in trees or caves, though they will also make homes in barns, abandoned vehicles and other man-made locations, according to New Hampshire Public Television.

Though raccoons are more than happy to make human areas their homes, they can be vicious when approached by humans. Humans should be particuarlly cautious of approaching raccoons because they are common carriers of rabies, roundworms and leptospirosis, according to The Human Society. Most experts do not recommend having a raccoon as a pet.

Raccoons are not very social creatures. They are nocturnal and sleep during the day. During the winter, they tend to sleep more, but they do not hibernate in the traditional sense. They simply sleep while their bodies live off stored fat. They lose around 50 percent of their body weight during the winter, according to the University of Michigan's Animal Diversity Web(ADW).

Though these animals look like the outlaws of the outdoors, raccoons are very clean creatures. They are known to wash their food in streams and even dig latrines in areas they frequent regularly.

As omnivores, raccoons eat vegetation and meat. The vegetation in their diet consists of cherries, apples, acorns, persimmons, berries, peaches, citrus fruits, plums, wild grapes, figs, watermelons, beech nuts, corn and walnuts. When it comes to meat, raccoons consume more invertebrates than vertebrates, according to the ADW. Some of the raccoon’s favorite animal treats are frogs, fish, crayfish, insects, rodents and bird eggs. When food is scarce, raccoons aren’t above scavenging human trash or eating roadkill.

For the first two months of their lives, babies live in their den and are weened at 7 to 16 weeks. At 12 weeks, they will start to roam away from their mothers for whole nights at a time, according to the Washington Department of Fish and Wildlife. They become completely independent at 8 to 12 months of age. Raccoons live around 2 to 3 years in the wild.

Here is the taxonomy of the raccoon, according to Integrated Taxonomic Information System (ITIS).

According to the International Union for Conservation of Nature (IUCN), the pygmy raccoon is critically endangered. The pygmy raccoon may have fewer than 250 mature individuals left in the wild, and the IUCN estimates that the total population size, including juveniles, is only 323 to 955. Other raccoon populations are not currently endangered.

Raccoons are considered one of the primary carriers of the rabies virus in the United States, though only one person has ever died from a raccoon to human transmission of the disease, according to the Centers for Disease Control and Prevention.

One theory is that the black mask around a raccoon’s eyes helps deflect glare and helps with night vision, according to PBS Nature.

Raccoons have five toes on their front paws that act much like human hands.