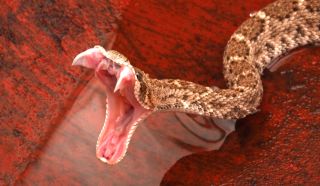 A rattlesnake striking with fangs extended. Rattlesnake bites can be dangerous but are very rarely fatal to humans.
(Image: © Audrey Snider-Bell | Shutterstock)

Rattlesnakes are large, venomous snakes that are found throughout North and South America. The greatest concentration of them is in the Southwestern United States and in Northern Mexico. Arizona is home to 13 species of rattler, more than any other state. The most distinctive feature that these species share is the rattle.

Residents of the Southwestern United States likely have heard the distinctive buzz of these pit vipers. Their namesake rattle is a highly effective warning sign, signaling predators to stay away. “Rattles are segments of keratin that fit loosely inside one another at the end of the snake’s tail,” explained Sara Viernum, a herpetologist based in Madison, Wisconsin. “These segments knock against each other to produce a buzzing sound when the snake holds its tail vertically and vibrates the rattle. Each time a rattlesnake sheds its skin it adds another segment to the rattle.”

Scientists consider the rattlesnake’s rattle a highly evolved and sophisticated warning system — which makes sense since, according to the San Diego Zoo, these are the newest and most evolved snakes in the world.

Rattlesnakes also hiss, a second element of its warning posture that is often overlooked and overshadowed by its rattle, writes Laurence Monroe Klauber in "Rattlesnakes: Their Habits, Life Histories, and Influence on Mankind" (University of California Press, 1997). Viernum said the behavior “is similar to a cat hissing when threatened by a dog. In rattlesnakes, hissing and rattling their tails both serve as warning signals.

“The process of hissing occurs when a snake forcefully expels air from the glottis within the throat,” Viernum continued. “This causes structures within the glottis to rattle, creating the hissing sound.” The snake's one functional lung has relatively large air capacity, and as the snake hisses, its body may swell up or deflate. Interestingly, snakes are deaf to airborne sounds, so the hiss is only a warning for animals that can hear and not a means of communication with other snakes.

Rattlesnakes can range from one to eight feet, depending on the species (the big one is the eastern diamondback), according to the National Wildlife Federation. They are thick-bodied snakes with keeled (ridged) scales in a variety of colors and patterns. Most species are patterned with dark diamonds, rhombuses or hexagons on a lighter background.

“Other distinctive physical characteristics include producing venom, heat-sensing facial pits, hinged fangs and live births,” said Viernum. “These characteristics are shared with other pit vipers such as the cottonmouthand copperhead.” After the rattle, rattlesnakes’ most distinctive physical feature is their triangular head. Also, they have vertical pupils, like cat’s eyes.

Young rattlesnakes do not yet have their rattles, though they are as dangerous as adults, according to the National Park Service at Yosemite. Furthermore, some adults may lose their rattles, so it is a good idea look out for the triangular head.

These adaptable serpents can thrive in a variety of environments. They are most abundant in the desert sands of the Southwest, but they also like grasslands, scrub brush and rocky hills. They can be found in the swamplands of the Southeastern United States and in the meadows of the Northeast. These snakes can handle high elevation and are found everywhere from sea level to 11,000 feet (3,353 m), according to the San Diego Zoo.

Rattlesnakes spend some time in dens, which they make in rocky crevices. Those in colder climates hibernate there for the winter. According to the South Dakota Game, Fish, and Parks Department, generation after generation of rattlesnake will use the same dens. The San Diego Zoo reported that they sometimes use the same den for more than 100 years. Upon leaving their dens, they like to sun themselves on rocks and other open places. Though they are not nocturnal, in the hot summer months they may be more active at night.

Despite their venom, rattlesnakes are no match for king snakes, which are fond of putting them on their dinner menus, according to the California Department of Fish and Wildlife.

In addition to rattling and hissing, rattlesnakes exhibit other defensive behaviors. “They may also coil their bodies and raise their heads high off the ground in a defensive posture,” said Viernum. “This coiled position serves as a way to anchor the body if they body if they feel the need to strike with their raised head.

Rattlesnakes are ovoviviparous, which means that eggs incubate inside the mother’s body. Babies are born live, encased in a thin membrane that they puncture after being born. Ratters mate in the spring and summer, depending on the species, and, according to the Denver Zoo, males may engage in combat. Mothers can store sperm for months before fertilizing the eggs, and then they carry babies for about three months. They only give birth every two years, usually to about 10 baby rattlers. Mothers don’t spend any time with their offspring, slithering off as soon as they are born.

The National Wildlife Federation reported that rattlesnakes typically live for 10 to 25 years.

Rattlesnakes’ favorite foods are small rodents and lizards. They lie in wait until a victim comes along, and then strike at speeds of five-tenths of a second, according to the San Diego Zoo. Their venom paralyzes the prey, which they then swallow whole. According to the University of Michigan Museum of Zoology’s Animal Diversity Web (ADW), timber rattlesnakes wait until the prey is dead before swallowing it. The digestive process can take several days, and rattlesnakes become sluggish and hide during this time. Adult rattlers eat about every two weeks.

Most people bitten by rattlesnakes have inadvertently stepped on them — so watch where you’re walking! Rattlesnake bites can be dangerous but are very rarely fatal to humans. With proper medical treatment, including antivenin, bites are usually not serious.

Their venom is extremely potent. “The venom of most rattlesnake species is composed mainly of hemotoxins,” Viernum said. “Symptoms include temporary and/or permanent tissue and muscle damage, loss of an extremity depending on the location of the bite, internal bleeding, and extreme pain around the injection area.”

Some rattlesnake species have venom that contains neurotoxins. “Mojave, tiger, and speckled rattlesnakes are examples of rattlesnakes where either the entire species or certain populations within the species produce neurotoxins,” said Viernum. She explained that neurotoxins act faster than hemotoxins and attack the nervous system. “Symptoms from a neurotoxic rattlesnake bite include problems with vision, difficulty swallowing and speaking, skeletal muscle weakness, difficulty breathing, and respiratory failure.”

Nevertheless, Viernum reinforced the idea that fatalities from rattlesnake bites are rare if treated in a timely manner.

According to DesertUSA, there is some evidence that rattlesnake venom is becoming more neurotoxic across the board, which may be an evolutionary strategy, as some rodents are evolving to be more resistant to hemotoxins.

The taxonomy of rattlesnakes, according to the Integrated Taxonomic Information System (ITIS), is:

There are 29 species, including:

Sometimes called a canebrake rattlesnake, these snakes found in the Eastern United States. According to the New Hampshire Fish and Wildlife Department, they are large, regularly growing up to 5 feet (1.5 m) long, and have a large banded or chevron-shaped brown and black pattern. However, it is hard to see the brown pattern on some snakes, and they look uniformly black. On others, the background is tan and their bands are clearly brown. According to the Florida Museum of Natural History, timber rattlesnakes in the Sunshine State and other parts of the South are lighter colored with a reddish brown stripe running down the center of their backs.

According to National Geographic, these are the largest venomous snakes in North America, reaching up to 8 feet (2.4 m). They are found from North Carolina to Louisiana. They have a visually striking yellow-bordered black diamond pattern.

At up to 7 feet long (2 m), this is the largest of the Southwestern rattlers and considered the most dangerous. According to the ADW, it causes more fatalities than any other snake in the United States. Its back is covered with dark diamond-shaped patches lined with lighter scales, and according to the Arizona-Sonora Desert Museum, its rattle has a unique black-and-white, raccoon-like color scheme. Unlike many other rattlers who flee, the Western diamondback will stand its ground, coil, and hiss when threatened.

A small rattlesnake reaching less than three feet (1 m), this Southwestern rattlesnake has extensive cross-banding and the smallest head of any rattler, according to the ADW. Its bands may be brownish or gray in color on a brown or orange-ish background. Its head is small in proportion to its body, so it holds less venom — though it is no less potent.

Most species of rattlesnakes are not endangered, according to the International Union for the Conservation of Nature (IUCN). However, the group's Red List of Threatened Species lists three species of concern:

The long-tailed rattlesnake (Crotalus stejnegeri) is listed as "vulnerable." This species lives in western Mexico. It is a rare species, according to the IUCN, and is known only from a few specimens. The population is likely decreasing due to loss of habitat caused by logging and agriculture.

The Tancitaran dusky rattlesnake (Crotalus pusillus) is listed as "endangered" because it is found only in a small area of Mexico; however, no population information is available.