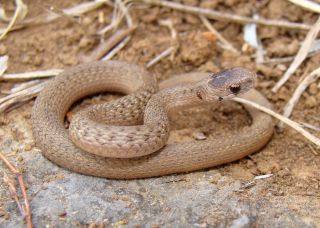 The name brown snake refers to two different genera of snakes, found on two different continents. If you are in North America, brown snake is the common name for Storeria, a small, shy, nonvenomous snake. If you are in Australia, Papua New Guinea or West Papua, brown snake is the common name for Pseudonaja, a genus of highly venomous snakes that includes the Eastern brown snake, considered the second most venomous land snake in the world, according to Australia’s Billabong Sanctuary.

In North America, “brown snakes are small, slender snakes and are typically brown to reddish-brown or gray in coloration,” said Sara Viernum, Wisconsin-based founder of The Wandering Herpetologist. They have “two parallel rows of dark spots bordering a light stripe down their backs [as well as] pale venters with small dark spots along the edges.” (Venter is a zoological term for underside; in this case, it refers to the snake’s belly.)

North American brown snakes are petite, ranging between 10 and 21 inches [25 to 53 centimeters] in length, said Viernum. “Juveniles have a yellowish collar around their necks and are usually darker in coloration than adults with a faintly spotted back pattern.”

North American brown snakes are widely distributed. They are common throughout the eastern half of the United States, though they do not venture into high elevations. They are also found in Southern Canada and northern Mexico, according to the University of Michigan’s Animal Diversity Web (ADW).

Brown snakes are sometimes referred to as “city snakes” because they thrive in residential areas. According to the Savannah River Ecology Laboratory, they are often the most common snakes found in urban areas. They spend time under urban debris — trash piles, construction materials, etc. — and other forms of ground cover, such as loose stones and flat rocks. When not in the city, brown snakes live in forests, scrub forests and marshes. Brown snakes are fairly abundant because of their ability to live in a wide variety of habitats.

Brown snakes spend a good deal of their lives underground or under rocks, leaf litter or logs. They mostly venture out in the evenings or at night, when they are sometimes seen crossing roads. They leave their hideaways during heavy rains in the fall and spring, according to James H. Harding’s book "Amphibians and Reptiles of the Great Lakes Region."

Brown snakes hibernate during the winter and sometimes share dens with other small, nonvenomous snakes like garter snakes, red-bellied snakes and smooth green snakes, according to Harding.

Some predators of brown snakes are birds of prey, larger snakes, large frogs and toads, weasels and domestic cats and dogs. “They are shy, secretive snakes but when threatened they will flatten their bodies to appear larger and release a musky fluid from their cloaca,” said Viernum.

“Brown snakes are not venomous,” emphasized Viernum; humans have nothing to fear from them. They use their forked tongues to collect chemicals from the air that they then “smell.” Since they hunt primarily underground and in the dark, brown snakes rely heavily on this sense to find prey, according to the ADW.

Brown snakes eat food that is easily accessible both underground and out in the open. They are prime predators of slugs, snails and earthworms and play an important role in controlling the population of those animals. They are also known to eat salamanders, beetles and soft-bodied grubs. Their teeth and jaws are specially adapted to quickly and easily pull snails out of their shells, wrote Harding.

Brown snakes breed once a year. The male follows a pheromone trail left by the female and then uses his “smelling” tongue to double-check that she is a potential mate. He circles and touches her in what Harding considered courting movements and then inserts his hemipenis into her cloaca.

“North American brown snakes are a live-bearing species (viviparous),” said Viernum. This means the mothers do not lay eggs nor do the eggs hatch within her body (ovoviparity). They typically give birth to between 3 and 40 young in the late summer. They reach sexual maturity at about 2 years of age.

Brown snakes’ lifespan in the wild is unknown, but in captivity they live to be about 7 years old, according to the ADW.

The taxonomy of North American brown snakes, according to the Integrated Taxonomic Information System (ITIS), is:

Brown snakes are fairly common, and do not appear to be endangered. The International Union for Conservation of Nature (IUCN) reports that the Mexican yellow-bellied snake on its Red List of Threatened Species is "Vulnerable" because of its small area of distribution in the Sierra Madres and a decline in its forest habitat.

There are nine species of Pseudonaja, found throughout Australia, Papua New Guinea and West Papua, according to The Reptile Database. All are highly venomous; even the juveniles can administer deadly bites. The best-known species are the Eastern brown snake, Western brown snake and dugite, or spotted brown snake. Another Australian snake called the king brown snake is not a species of brown snake, despite its name.

These brown snakes are long and slender with narrow heads. They are “typically uniformly brown, but some may be patterned. They have spotted or mottled markings on their venter,” said Viernum. “They are 3-6 feet [1 to 2 meters] in length but can be as long as 8 feet [2.4 m].”

Some Western brown snakes have coal-black heads while others have a black V on their necks or other color morphs, according to theAustralian Museum. Herpetologists have observed them getting darker in color in the hot summer.

“Juveniles are also variable in coloration and pattern, usually varying from yellow to brown with a black head and narrow black bands along the body and tail,” said Viernum.

The eastern brown snake is found throughout eastern Australia, though not in Tasmania. It is also found in Papua New Guinea. According to Billabong Sanctuary, it can thrive in a wide variety of habitats, though it particularly likes grasslands, woodlands and pastures. Because it is comfortable in urban areas, it is responsible for the majority of recorded snakebites in Australia (approximately 5 per year from all snake species, according to Billabong Sanctuary).

The Western brown snake is found throughout most of mainland Australia with the exceptions of the wetter east coast and southwest coast. It likes arid climates with shrubs and savannah woodlands, according to the Australian Museum.

Dugite brown snakes live in the coastal dunes, heaths, and shrublands of southwestern Australia and nearby islands. It is particularly fond of golf courses, according to the Australian Museum.

Australian/Oceania brown snakes are quick-acting, fast-slithering snakes, said Viernum. They are primarily diurnal though may become nocturnal in hot weather. Snakes in cold climates burrow underground during the winter.

Pseudonaja comes from the Greek words for “false” and “cobra.” The name is fitting because brown snakes are known to exhibit cobra-like defensive behaviors. “When threatened it will hold its neck and head erect and gape open its mouth,” said Viernum. Still, they will usually flee when confronted with humans.

“The venom of Eastern brown snakes consists mostly of neurotoxins, specifically textilotoxin,” said Viernum. “Neurotoxins are toxic substances that are destructive to nerve tissue and can result in central nervous system damage, epilepsy, and memory impairments. Textilotoxin has the highest lethality of any known snake venom neurotoxin.

"Their venom also contains strong coagulants as well as cardiotoxins and nephrotoxins. A bite from an Eastern brown snake can result in dizziness, convulsions, renal failure, cardiac arrest, paralysis, and uncontrollable bleeding. If medical attention is not received in time, a bite can lead to a fatality, though fatalities are rare.”

Brown snakes have relatively short fangs compared to vipers and cobras in Asia and Africa, which have much higher fatality rates. The bite of an Eastern brown snake can kill a person but because of their short fangs, they do not often bite humans. According to the Billabong Sanctuary, most bites are dry, which means the snake does not inject any venom.

Australian/Oceania brown snakes eat mostly small mammals and reptiles such as skinks and geckoes. They also eat frogs and small birds. These snakes use their speed to catch prey, and then use a mix of venom and constriction to kill it, according to the Australian Museum.

Brown snakes mate once a year, usually in the spring, though the timing can depend on the warmth of the climate. Males engage in ritualistic combat over females, according to Billabong Sanctuary. Competing males braid their bodies together and push down on each other’s heads, trying to get their opponent’s head to the ground. The victor will mate with the female for several hours. Females can mate with more than one male per breeding season.

“Brown snakes are an egg-laying species,” said Viernum. After mating, females lay around 16 eggs, though clutches may have as many as 35. Sometimes, females lay multiple clutches of eggs one-to-two months after the first. They lay eggs in damp, abandoned animal burrows. The mother will stay with the eggs for up to five weeks, protecting them from predators. They sometimes share nesting sites with other females and return to the same ones year after year.

Eggs gestate for about 2.5 months. Babies are about 11 inches when they hatch.

The taxonomy of Australian brown snakes, according to the Integrated Taxonomic Information System (ITIS) and the Reptile Database, is:

Australian/Oceania brown snakes are not endangered, according to Billabong Sanctuary. They have adapted well to human developments. The IUCN does not have a listing for any snakes in the genus.