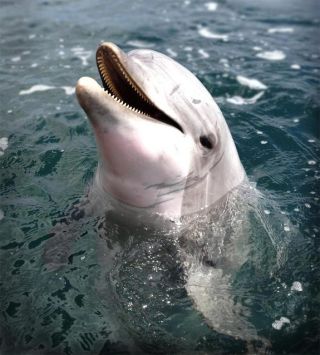 Dolphins may use ultrasound to detect a baby inside a pregnant woman.
(Image: © Brian Branstetter)

Using echolocation, dolphins might be able to detect a pregnant woman's developing fetus, some experts say.

Dolphins emit sounds in their environment and listen to the echoes that return — a process that helps them identify the shapes and locations of objects. Doctors use a similar technique to image a developing human baby. Both involve ultrasound — high-pitched pulses of sound above the range of human hearing.

"I think it's extremely plausible [dolphins] would be able to detect a fetus," said Lori Marino, a neuroscientist at Emory University in Atlanta who studies cetacean intelligence. However, "you'd have to really do a well-controlled study to make a definitive statement," she cautioned.

Anecdotal reports suggest dolphins take a special interest in pregnant women. The animals supposedly swim up to the expecting women and make buzzing sounds near the women's tummies. "Buzzing" is a form of very concentrated echolocation. When the dolphins want to hone in on something or stimulate another dolphin, they put their snout against the skin and buzz, Marino said, adding, "It sounds like a squeaky door." [The 10 Strangest Pregnancies in the Animal Kingdom]

Malcolm Nicolson, a history of medicine professor at the University of Glasgow in Scotland, agreed that dolphins may be able to detect a human woman's pregnancy. For instance, a dolphin that swims with a female trainer before and after she becomes pregnant "might well be able to detect a difference in her echo profile," or the pattern of sounds returned by echolocation, Nicolson said. Dolphins might even have the ability to detect a fetal heartbeat in a woman they have never bumped up against before, he added. But Nicolson, who wrote a book on the development of obstetric ultrasound, noted that this was only speculation.

At least one study has found that dolphins can perceive shapes through an opaque barrier, such as a box. "It would seem logical that they would have the potential to discriminate between different humans" who are pregnant or not, said Mike Walsh, an aquatic animal veterinarian at the University of Florida. After all, water is the perfect medium for ultrasound, Walsh said. Still, the dolphins may not know that what they're seeing inside the pregnant woman is a person, he said.

By extension, it's quite possible that dolphins can detect pregnancies in other dolphins, Marino said. Indeed, the animals have been seen buzzing on other pregnant dolphins. Dolphins use echolocation for many different purposes, from communicating in a group to disciplining their offspring, Marino said, adding, "They're always buzzing!"

Dolphins probably aren't born with their echolocation ability, but develop it over time. Baby dolphins, for instance, babble before they learn to make more complex sounds, Marino said. She suspects their echolocation must be learned as well.

Even though dolphins might be able to detect a pregnancy, giving birth near dolphins may be a bad idea, as the meat-eating marine mammals are known to sometimes be aggressive, scientists say.

Some people claim dolphins also have the ability to diagnose or treat human ailments, but these claims are much less credible, Marino said. For example, people have reported dolphins acting strangely in the presence of someone with a cancerous tumor. However, there's no evidence to substantiate this claim, Marino said, and no evidence that dolphins can heal people using echolocation.