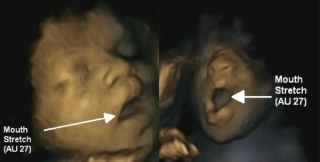 During the second and third trimester, fetuses yawn frequently, and those yawns can be distinguished in four-dimensional ultrasounds from other mouth-opening behaviors. As the fetuses mature, they seem to yawn less frequently, the researchers added.

The findings, published Nov. 21 in the journal PLoS One, suggest yawning patterns of the fetus across pregnancy could be used to assess whether a growing fetus is developing normally.

Yawns in adults are contagious, but babies don't catch them. Anemic babies yawn more in utero than healthy ones, according to a 1999 study detailed in the journal Ultrasound Obstetrics and Gynecology. And premature babies yawn more than full-term babies. (Previous research has shown that as fetuses develop, their facial expressions in the womb become more complex.)

That led Reissland to wonder whether yawning patterns could be an early marker of healthy development that could be seen even in utero.

To do so, the team the team took three-dimensional ultrasound videos of seven female and eight male fetuses once a month, as they grew from 24 weeks to 36 weeks gestation (roughly five months to eight months into pregnancy). The babies-to-be yawned about six times an hour at 24 weeks, but yawning waned over the 12-week period and had stopped by 36 weeks. A 3D-ultrasound video produces 4D-ultrasound images, as the fourth dimension is time.

Reissland and her colleagues are unsure of fetal yawning's function, though they say it is not a sign of sleepiness. Rather, because the scans suggest yawning follows a predictable trajectory over fetal development, the behavior may be linked to brain development early in gestation, said Reissland.

"In fact, yawning might be a trigger for brain maturation," she told LiveScience. "Ultimately, it could be used in medical practice. If you see a fetus yawning a lot, there might be some problem."