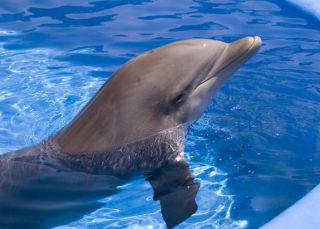 The bottlenose dolphin (Tursiops truncates) is one of the most well-known dolphins, and is often referred to as "Flipper" because of the TV series. Bottlenose dolphins have a worldwide distribution through tropical and temperate waters and can frequently be spotted along the shores of the United States.
(Image: © )

What miracles is Mother Nature hiding from us? Look no further than the bottlenose dolphin for a little bit of inspiration. At least that's what a researcher at the Georgetown University Medical Center suggests.

Michael Zasloff has published a letter in the July 21 issue of the Journal of Investigative Dermatology, in which he recounts several documented incidents of serious injuries to dolphins, presumably inflicted by sharks. These bites, some larger than a basketball, healed in weeks without leaving the dolphins disfigured, without causing them apparent pain, and without becoming visibly infected.

"If I saw this in a human being, I wouldn't believe it," Zasloff said. "It should awe us. You have an animal that has evolved in the ocean without hands or legs, which swims faster than we can, has intelligence that perhaps equals our social and emotional complexity, and its healing is almost alien compared to what we are capable of." [See images of healing dolphins]

Zasloff has always been interested in harvesting nature's bounty of self-made drugs. He discovered the natural antibiotics that frogs use in their skins and a possible cancer treatment in the dogfish shark.

Several remarkable abilities work together for the seemingly miraculous healing in dolphins. First, even with a large gaping wound in their side, dolphins don't bleed to death. Zasloff said they may use their diving mechanism, which cuts off the blood flow to unimportant parts of their bodies, to reduce the flow of blood to the injury while it clots. [The Ocean's Deepest Divers (Infographic)]

Second, during the healing process the dolphins' wounds don't show signs of infection. Researchers have discovered that their skin and blubber contain compounds with antibacterial properties, which may help stop infections in the open wounds.

The dolphins also don't show typical reactions to pain while they are recovering from these injuries. Usually, a deep open wound would alter an animal's behavior and eating habits for a few weeks. In his discussions with dolphin handlers, Zasloff discovered that the dolphins eat and behave normally even when they are seriously injured.

The healing ability itself is pretty miraculous, Zarloff said. In a matter of weeks the dolphins can completely replace the missing tissue — even gouges the size of two footballs — without a dent in their body shape. They may get this regenerative ability from special stem cells, like some amphibians that re-sprout limbs.

Understanding the dolphin's blubber-regenerating abilities could be useful to humans. The techniques these seagoing mammals use to rebuild their tissue could rely on some special type of stem cells or proteins, and it may be something humans could appropriate.

"This is an animal of extreme similarity structurally to us," Zasloff said. "This could be the source of information, the place to find some [answers to the] great mysteries that we as physicians are trying to solve."

The other proteins the dolphins are known to produce during healing, like a pain-relieving or anti-bacterial compound, could also work on humans. Because the dolphins create their own pain-relieving compound, there's a chance it wouldn't be addictive to humans as are many pain relievers on the market today.