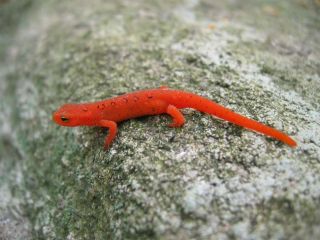 For the red-spotted newt (Notophthalmus viridescens), a protein called nAG could be key in its ability to re-grow limbs after amputation.
(Image: © Dreamstime.com)

Limb loss for a salamander is nothing to get up in arms about—they just re-grow a new one. But how? One molecule could be behind their remarkable limb-sprouting ability, according to a new study that could also grow the field of human regenerative medicine.

The ability to conjure up an arm or leg after amputation works only in Hollywood, like when boy-wizard Harry Potter endures the pain of re-growing arm bones. Real regenerative medicine lags far behind fiction.

While some political barriers to the stem-cell research required in regenerative medicine have been eliminated and private stem-cell funding has stepped up, the many scientific unknowns of regenerating limbs and organs have hindered progress.

A few years ago, a man in Cincinnati who accidentally severed a fingertip applied a substance made from pig bladder thought to promote tissue regeneration. The tip of his finger grew back within six weeks, though this is a single case and just a bit of the finger grew back.

The new study, published in the Nov. 2 issue of the journal Science, shows a protein called nAG helps to stimulate the proliferation of stem cells that ultimately form new limbs in red-spotted newts (Notophthalmus viridescens), a type of salamander.

Stem cells have the ability to differentiate, or specialize into various tissues needed to create body parts. When a newt or other amphibian loses a limb, cells in the region regress to a time when they were just naive cells that had not yet specialized, a process called de-differentiation. These stem cells grow and divide at the tip of the stump (where the limb was once attached) to form a larger mass of cells called the blastema.

Brockes, lead author Anoop Kumar of the University College London and colleagues ran experiments in which they chopped off red-spotted newts' limbs and the attached nerves. The nerves are needed to stimulate the production of the nAG protein, so the nerve-severing essentially removed the newts' source of nAG. Then they zapped the cells of the now-exposed body region with electrical pulses so they could deliver little bundles of DNA carrying genes for the protein nAG. Within 30 to 40 days, the newts had regenerated their lost limbs, digits and all. However, the new limbs had less muscle mass than the original ones.

Further lab experiments revealed the nAG protein—a molecule—works directly on the blastema cells, causing them to grow and divide.

"It essentially tells us that one single molecule is able to support the proliferation of blastema cells right from the start of regeneration all the way through to the formation of the digits," said biologist David Stocum of Purdue University in Indiana, who wrote an accompanying article in Science. Stocum was not involved in the current study.

Stocum adds that several other growth factors are known to stimulate the proliferation of blastema cells, though these molecules haven't been tested rigorously like in the recent study.

The big question is whether the same regenerative mechanism applies to humans.

"If you can make those cells de-differentiate, then you've got to make them divide to produce a blastema, and nAG would be a molecule that you could use to make that happen," Stocum said in a telephone interview.

But that doesn't mean human-limb regeneration is right around the corner, by a long shot. "What everybody is interested in, of course, are things about the extension to humans," Brockes told LiveScience. "I'm really very cautious about that."

Brockes noted that in order to move human limb regeneration forward scientists need to figure out if there is a human equivalent to the blastema that salamanders form after a limb gets amputated.

"I don't think we generate those [blastema] cells after injury in a way that a newt does," Brockes said.