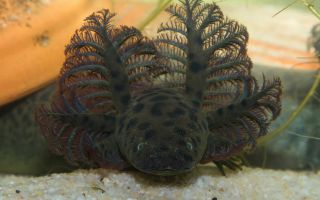 A sinuous swamp salamander with spots like a leopard and Christmas-tree-shaped fronds growing from its head hid from scientists for decades. But researchers have finally described this elusive and two-legged aquatic oddity.

Dubbed Siren reticulata — reticulated siren — the animal bears a closer resemblance to an eel than a salamander, with a long body and no hind limbs. In fact, its body shape and spotted pattern previously earned it the name "leopard eel," scientists reported in a new study.

Only recently did researchers confirm that the slippery salamander is a new species. Like other sirens (a group of aquatic salamanders) the newfound species is huge — it measures up to 2 feet (60 centimeters) in length, and is one of the largest animals with backbones described in the U.S. in more than a century, according to the study. [In Photos: The World's Freakiest Looking Animals]

Unlike many other types of salamanders, sirens have extremely elongated bodies, are entirely aquatic and only have front legs. Their heads are crowned with branching external gills — structures that help them extract oxygen from the water, study co-author David Steen, a research ecologist with the Georgia Sea Turtle Center, told Live Science.

Sirens were first described in the 18th and 19th centuries, but they remain poorly understood; the group has flown under the scientific radar for so long primarily because they're tricky to detect and observe in the murky streams and ponds of their swamp habitats in the southeastern United States, Steen explained.

To determine if the spotted siren was indeed a new species, the researchers needed specimens. Steen caught one in 2009, and it wasn't until 2014 when scientists captured three more.

Evaluation of these sirens — along with preserved museum specimens — enabled the study authors to perform detailed analysis of the animals' DNA and body structures, determining that they were genetically and physically distinct from known siren species that live in the area: the greater siren and the lesser siren.

Natural predators for the reticulated sirens likely include snakes, herons, egrets and predatory fish, Steen told Live Science. But the giant salamanders face a more dire threat from human activity, such as development that encroaches on their habitat. Because little is known about the extent of the sirens' range, it's possible that wetlands where sirens lived are already being drained, Steen said.

Identifying this giant salamander also serves as a reminder that there are new species to be discovered "right in our own backyards," Steen said.

"This is a big animal, and it's only being described in 2018. There's probably a lot more species for us to learn about — and we should do it quick, before these things disappear."

The findings were published online today (Dec. 5) in the journal PLOS ONE.