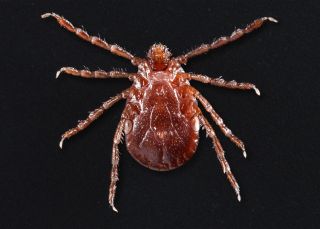 A tick species that's native to Asia has now spread to the United States, and it's popping up in numerous places along the East Coast, according to U.S. officials.

The newfound tick, known as the longhorned tick or Haemaphysalis longicornis, was first identified in the U.S. last year, when it was found on a sheep in New Jersey, according to the New Jersey Department of Agriculture. Now, it's spread to six other states: New York, Virginia, West Virginia, Arkansas, North Carolina and, most recently, Pennsylvania.

"The discovery of the longhorn tick [here] is another reminder of the importance of tick prevention," Dr. Rachel Levine, secretary of health for the Pennsylvania Department of Health, said in a statement on July 31. [10 Bizarre Diseases You Can Get Outdoors]

Females can reproduce asexually and lay thousands of eggs.

Female longhorned ticks don't need a male to reproduce. They can spawn asexually using a process known as parthenogenesis. After feeding, a single female can lay around 2,000 eggs, according to the Pennsylvania Department of Health. That's enough to establish a tick population in a new location, the U.S. Department of Agriculture (USDA) says.

They suck so much blood, it can cause anemia, or even death, in livestock.

Due to these large numbers, longhorned ticks can cause severe infestations in livestock, leading to weakness, anemia or even death in the animal.

"If too many ticks attach to one animal, the loss of blood can kill the animal," according to a statement from the New Jersey Department of Agriculture.

Adult longhorned ticks grow to the size of a pea when they are fully engorged with blood. At other stages of life, the ticks are very small — the size of a poppy seed or smaller, according to the USDA.

In addition to livestock, the ticks can feed on humans, pets, small mammals, birds and other animals.

Scientists don't know how they got here.

Scientists are still investigating how this tick species spread to the United States. It's possible it may have entered the country by hitching a ride on pets, horses, livestock or humans, the USDA said. The tick is also an invasive species in Australia, New Zealand and several Pacific islands.

The health threat to humans is unknown.

In other countries, the longhorned tick is known to transmit disease to both humans and livestock. These diseases include the bacterial infections babesiosis, ehrlichiosis, theileriosis and rickettsiosis, as well as certain viral diseases, according to the USDA. One virus spread by the longhorned tick causes a disease called severe fever with thrombocytopenia syndrome (SFTS), The New York Times reported Aug. 6. STFS can be deadly.

There are ways to protect yourself.

People can protect themselves from longhorned ticks by taking the same precautions recommended to prevent tick bites from native ticks: Wear long sleeves and pants, apply insect repellent containing DEET, and check yourself and your pets for ticks.