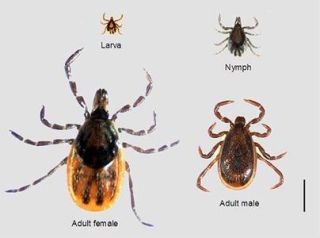 This image shows an adult female, an adult male, a nymph and a larva of the tick species Ixodes scapularis, which carries Lyme disease and babesiosis.
(Image: © CDC, courtesy of Dr. Marc Dolan.)

People who live in or travel to the Northeast or upper Midwest this summer should take precautions to avoid contracting babesiosis, a tick-born disease native to those areas, according to a new report from the Centers for Disease Control and Prevention.

Ninety-seven percent of cases occurred in Connecticut, Massachusetts, Minnesota, New Jersey, New York, Rhode Island and Wisconsin. Most cases — 82 percent — occurred in the summer months (June through August). More than half of infected people were over age 60.

Babesiosis is caused by the parasite Babesia microti, which infects red blood cells. Symptoms can include fever, nausea and headache, although most people infected with the parasite feel fine, the CDC says.

In recent years, cases of babesiosis in the United States have increased, and the disease may be spreading into new regions. Last year was the first time health officials reported cases of the disease to the CDC using a standard definition of the illness. Surveillance for the disease occurred in 18 states.

To prevent babesiosis infection, people who live in or travel to regions where the disease is found should take the following precautions: avoid tick-infested areas, apply repellents, wear long pants and long-sleeved shirts when outdoors, shower soon after being outdoors, and check their entire bodies for ticks, the CDC says.

Tick bites are the most common way babesiosis is transmitted, but people can also become infected through blood transfusions, and the disease can pass from mother to child during pregnancy.

In 2011, 10 people were suspected of contracting babesiosis through blood transfusions, and one case of congenital transmission of the disease was reported.

Treatments for babesiosis are effective, and usually involve a combination of anti-malarial drugs or antibiotics, such as quinine and clindamycin, according to the New York State Department of Health. But most people do not become sick enough to require treatment, and the CDC says people who do not have symptoms should not be treated with drugs.

Because there's no way to screen the blood supply for the babesiosis parasite, people known to have had the disease should refrain from donating blood indefinitely, the CDC says.

Ongoing surveillance for the disease will allow officials to develop effective prevention and control measures to reduce the burden of babesiosis, the report says.

The report will be published tomorrow (July 13) in the CDC journal Morbidity and Mortality Weekly Report.

Pass it on:  Protect yourself from ticks this summer to avoid contracting babesiosis.