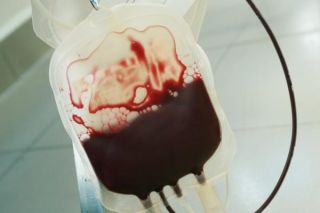 Researchers announced this week that the parasite that causes babesiosis, a malarialike illness transmitted by ticks, is passing undetected through the nation's blood supply. The study found 162 cases of babesiosis acquired through blood transfusions over the last three decades. Does that mean blood transfusions are becoming unsafe? "The blood supply in the United States is safer than it's ever been," said Dr. Matthew Kuehnert, director of Center of Disease Control and Preventions' office of blood organ and other tissue safety. The risk of acquiring an infection from a blood transfusion is extremely low, Kuehnert and other experts say. In fact, you're much more likely to experience an allergic reaction from a transfusion than you are to pick up a disease-causing bug. The risk of becoming infected with HIV or hepatitis C is around one in a million. On the other hand, some 50,000 to 70,000 people per year ? around one to three in a hundred ? will experience a significant reaction from a transfusion, he said. But there's more to be done. There are still blood-borne diseases, including babesiosis and malaria, that available tests cannot detect. Researchers are working to develop tests for these diseases and improve surveillance systems of donated blood to enhance the safety of our blood supply, Kuehnert said. Blood screening Every year about 5 million people receive blood transfusions, and more than 9.5 million donate blood, according to the CDC. This blood is screened in two ways. First, donors are asked questions to determine if they are healthy and whether they might be at risk for carrying certain blood-borne diseases. For instance, donors are asked if they have recently traveled to parts of the world where certain parasitic diseases, such as malaria, are common. Laboratory tests are also used to screen donated blood for eight infectious diseases. They are:

Lab tests also screen blood for general bacterial contamination and can detect about half the types of bacteria that might be in a unit of blood, Kuehnert said. Some of the diseases that cannot be detected are babesiosis, hepatitis A and malaria, Kuehnert said. There are also no blood tests for prion diseases such as Creutzfeldt-Jakob, which is the human version of mad cow disease. Then there are the diseases we don't know about or have yet to emerge. For example, HIV infections arose in the 1980s and were transmitted via blood transfusions before a test for the virus was developed. "We have to be pretty much on our toes for those sorts of threats all the time," said Richard Benjamin, chief medical director at the American Red Cross. Improvements Any test used to screen blood must meet very rigorous performance standards set by the Food and Drug Administration, Benjamin said. The Red Cross is now working with a commercial company that has developed a prototype test for babesiosis, thought it will likely take two or three years to be approved by the FDA, Benjamin said. The CDC is also working to improve surveillance of the blood supply. In 2010, the agency launched the Hemovigilance Module to collect reports of adverse events in patients who receive blood transfusions. This should help public health officials monitor transfusion-related infections, Kuehnert said. Pass it on: The nation's blood supply is safer than it's ever been, but there are still risks to getting a transfusion, experts say.