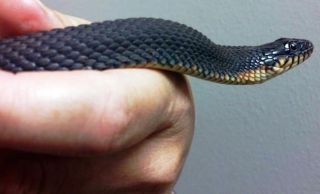 This yellow-bellied water snake at the Cape Girardeau Conservation Nature Center in Missouri may have given birth without help from a male via a reproductive process known as parthenogenesis.
(Image: © Candice Davis, MDC)

A female water snake in Missouri can do something that no human woman can (no matter how badly she might want to): She can have babies without any help from a male.

Earlier this month, a yellow-bellied water snake at the Missouri Department of Conservation's (MDC) Cape Girardeau Conservation Nature Center gave birth to a litter of baby snakes even though she hasn't had "relations" with a male snake in at least eight years.

It's the second year in a row that this snake has had a so-called "virgin birth," but the remarkable mama's birthing practices are not as miraculous as they may seem. Yellow-bellied water snakes are one of many species of reptile that can reproduce through a process known as parthenogenesis, MDC herpetologist Jeff Briggler said in a statement. [Animal Sex: 7 Tales of Naughty Acts in the Wild]

This weird method of reproduction works differently in different species, according to Briggler, who explained that, in general, parthenogenesis is a type of asexual reproduction "in which the offspring (babies) are produced by females without genetic contribution of a male."

Several snake species are known to reproduce this way, including timber rattlesnakes, copperheads, cottonmouths, Burmese pythons, common boas, green anacondas and pit vipers. Parthenogenesis is also common in the insect world — bees, wasps and stick insects all occasionally reproduce this way. And some species of fish, amphibians and birds also are capable of making babies through parthenogenesis (Sorry, mammals, but you can't do it this way).

Why do so many female animals resort to this type of copulation-free reproduction? The reason is pretty straightforward: they can't find a suitable male to reproduce with, according to Warren Booth, an evolutionary and population geneticist at North Carolina State University in Raleigh.

Booth and his colleague, Gordon Schuett, an evolutionary biologist and herpetologist at Georgia State University in Atlanta, have studied snake parthenogenesis for many years and have found that female snakes may resort to asexual reproduction as a way to conserve their finite supply of eggs. In other words, if they can't find somebody good enough to fertilize their eggs for them, female snakes take matters into their own "hands," rather than allowing their eggs to go to waste, Booth told Live Science in 2011.

How exactly do the female snakes fertilize their own eggs? That seems to depend on the situation. In some cases, females may actually store sperm from males they mated with before reaching sexual maturity. Then, when they are mature enough to reproduce, they use this sperm to fertilize their own eggs, according to Booth and Schuett.

But using old sperm to make a baby is not the same thing as parthenogenesis, in which no paternal genetic material is used. For this asexual process to occur, female snakes carry out meiosis, or the normal division of cells that usually results in the formation of four egg-progenitor cells, one of which becomes the egg.

Normally, the female's body reabsorbs the other three egg-progenitor cells, but in parthenogenesis, one of those female cells behaves like sperm, fertilizing the egg. The result is an embryo that only contains genetic material from the mother.

It isn't clear yet how the yellow-bellied water snake at MDC reproduced without help from any males. It may be possible that she stored sperm for eight years, using it to fertilize her own eggs, but if that's the case, she'll have set a new record. The longest a snake has been known to store sperm is five years, according to Booth and Schuett.

MDC is now teaming up with Booth to try to find out how the mama snake reproduced, according to Sara Turner, site manager at MDC's Cape Girardeau Conservation Nature Center, who told Live Science that nature center staff recently sent scale clippings from the baby snakes born this month (none of which survived) to Booth. The geneticists will analyze the DNA of the baby snakes to determine if they possessed DNA from both a male and female snake, or if the female snake did all the heavy lifting herself.