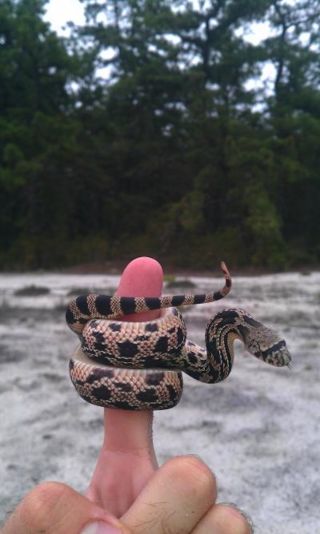 The snakes, which are classified as threatened in New Jersey, are one of the only large predators in New Jersey's Pine Barrens, so they play a critical role in the ecosystem. The Pine Barrens (a forested expanse of coastal plain in the southern portion of the state also known as the Pinelands) are jeopardized by habitat destruction and suburban expansion, with parts classified as "globally imperiled," in the same category as some rainforest areas, said Kevin P.W. Smith, a researcher and graduate student at Drexel University in Philadelphia.

The pine snakes, which can grow up to 6 feet long (nearly 2 meters) as adults, were taken from the wild as babies. To track the baby snakes, Smith collaborated with colleague Dane Ward, who is a state-certified snake surgeon. Ward inserted tiny tracking devices under the snakes' skin. The researchers then set the snakes free and let them roam, tracking their movements. [7 Shocking Snake Stories]

The study, led by Smith and to be presented on Aug. 6 at the annual meeting of the Ecological Society of America in Minneapolis, found for the first time that within a few weeks of hatching, these baby snakes can eat adult rodents whole, Smith told LiveScience. The study also established that black racers, another type of snake in the area, can eat baby pine snakes. The researchers discovered this when the GPS tag moved farther out of range than usual, leading them to a black racer with a GPS-tagged pine snake in its stomach, Smith added.

The pine snake has the unique ability to dig holes using a scale on its nose to scoop out sand, before getting its whole body into the hole and using it like a shovel, Smith said. "It's a strange and wonderful thing to watch," he said. "Not a lot of snakes have this ability."

These pine snakes are "not a risk to people — [they’re] very docile, and beautiful," Smith said. "They're big and charismatic." In fact, that's one of the reasons they are targeted by poachers in the Pine Barrens for the pet trade, he said.

Not only do the snakes serve an important role in their ecosystem, but by eating rodents, they also help tamp down diseases. Ticks, which carry pathogens like those that cause Lyme disease, thrive when rodent populations soar. But snakes keep the populations of both ticks and rodents in check, Smith said. "These snakes have a direct and important benefit to us," he said.