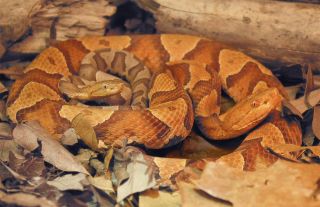 Wild female pit vipers can reproduce without a male, suggesting virgin births may take place in nature far more than before thought.

Asexual reproduction is common among invertebrates — that is, animals without backbones. It occurs rarely in vertebrates, but examples of it are increasingly being discovered. For instance, the Komodo dragon, the world's largest living lizard, has given birth via parthenogenesis, in which an unfertilized egg develops to maturity. Such virgin births have also been seen in sharks at least twice; in birds such as chickens and turkeys; and in snakes such as pit vipers and boa constrictors.

Although virgin birth has been observed in vertebrates in captivity, scientists had not yet seen it happen in the wild. This raised the possibility that such asexual reproduction might just be a rare curiosity outside the mainstream of vertebrate evolution.

"Until this discovery, facultative parthenogenesis — asexual reproduction by a normally sexual species — has been considered a captive syndrome," said researcher Warren Booth, a molecular ecologist at the University of Tulsa in Oklahoma. [7 Shocking Snake Stories]

The researchers collected genetic samples from long-term studies of the snakes — copperheads from Connecticut and cottonmouths from Georgia. They gathered specimens from 22 litters of copperheads and 37 litters of cottonmouths, both the mothers and their offspring. DNA analysis confirmed that in one litter from each species, the offspring were solely the product of the mother, with no genetic contributions from a father.

The researchers were able to analyze the large amount of data due to collaborations with Charles Smith and Pam Eskridge of the Copperhead Institute and Wofford College, S.C., and Shannon Hoss, a graduate student at San Diego State University.

"We just sat there stunned at the discovery," Booth told LiveScience. "This is something that we always believed existed, but in order to investigate it, it would take a massive amount of work in the field. … To detect it in both species in our first attempt was astounding."

"I think the frequency is what really shocked us," Booth added. "In the copperhead population, we detected one instance in 22 litters, whereas in the cottonmouths, it was one in 37 litters. Essentially, somewhere between 2.5 and 5 percent of litters produced in these populations may be resulting from parthenogenesis. That's quite remarkable for something that has been considered an evolutionary novelty, even by me up until this finding."

Pit vipers and many other creatures carry out meiosis, in which cells divide to form sex cells, each of which only possess half the material needed to make offspring. In the female pit vipers, pairs of their sex cells likely fused to generate embryos. The results were progeny that included only the mother's genetic material. However, these offspring weren't clones of the mother since they were not made using identical halves of her genome.

How prevalent, then, is virgin birth? And could it possibly extend to humans?

"In terms of other species, it is evident now that reptiles are a group that appear predisposed to parthenogenesis, whether facultative, as we address here, or obligate, where the primary reproductive mode is parthenogenesis and few or no males are known within the species," Booth said.

Obligate parthenogenesis may have arisen from ancestral interbreeding between species, though scientists aren't sure why some animals seem to randomly give birth without help from the male (the facultative type).

"What is common to those that reproduce facultatively is the lack of genomic imprinting — by that, I mean a process in which a specific set of genes are provided by the mother, and a second set from the father," Booth said. "These genes of different parental origin must interact in a process called genomic imprinting in order for the development of an embryo. This, as far as we are aware, occurs in all mammals with the exception of the monotremes — platypus and echidnas — and therefore explains why we cannot have facultative parthenogenesis in mammalian species without significant intervention by scientists." [The 10 Wackiest Animal Discoveries]

Originally, Booth and his colleagues thought such virgin births might happen if potential mates were not present, but over the years, they have seen six captive female boa constrictors give birth via parthenogenesis even when males were around during their breeding cycles. The number of times virgin births have occurred with different females also seem to rule out a freak accident causing it to occur, Booth and colleagues said. They are now investigating other possible causes for these virgin births — "these include genetics, viruses, tumors and bacteria," Booth said.

In the future, the researchers also hope to investigate other species for virgin births, such as water snakes in Oklahoma. In addition, they plan to see how well the offspring of virgin births survive and reproduce. It may be that virgin mothers can establish whole area populations of snakes by themselves. "We will know if this is possible in the next two to three years," Booth said.

The scientists detail their findings online Sept. 12 in the journal Biology Letters.