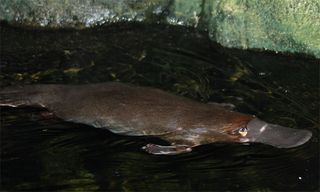 The platypus, found only in Australia is one of the five mammal species of that lay eggs instead of giving birth to live young. The other egg-laying mammals are four species of echidna.
(Image: © Gerry Pearce, australian-wildlife.com.)

The reason that odd, egg-laying mammals still exist today may be because their ancestors took to the water, scientists now suggest.

The egg-laying mammals — the monotremes, including the platypus and spiny anteaters — are eccentric relatives to the rest of mammals, which bear live young. In addition to laying eggs, other quirks make them seem more like reptiles than our kin. They have a reptilian gait with legs on the sides rather than underneath the body, for instance, and a single duct for urine, feces and sex instead of multiple openings.

These oddballs are often considered primitive "living fossils" that shed light on what our distant ancestors might have looked like.

Long ago, monotremes and their close relatives were the dominant mammals in the whole of Australia. Now only two kinds of monotremes are left on the planet — the duck-billed platypuses and the four species of echidnas, or spiny anteaters. Like all mammals, they possess hair, milk, sweat glands, three middle ear bones and a brain region known as the neocortex.

The monotremes were almost totally swept aside when their pouch-bearing marsupial cousins — modern examples of which include the kangaroos — invaded Australia 71 million to 54 million years ago. Marsupials appear to have a number of advantages over monotremes — their bodies seem more efficient at locomotion, and the fact that they give birth to live offspring could provide better care of young.

Moreover, before the marsupials reached Australia, they had migrated from Asia to the Americas to Antarctica. The struggle marsupials presumably had with all the animals on these continents during this journey might have primed them for competition, "while the Australian mammals [including monotremes] that went extinct upon the arrival of marsupials had for the most part been isolated in Australia for a very long time," explained researcher Matthew Phillips, an evolutionary biologist at the Australian National University in Canberra.

All these strengths help explain why marsupials triumphed in Australia. The mystery then is why any monotremes survived.

Now Phillips and his colleagues suggest that platypuses and echidnas lived on because their ancestors sought refuge where marsupials could not follow — the water.

Platypuses are amphibious creatures, while echidnas — the anteaters — are terrestrial. However, new genetic evidence and comparisons with fossil monotremes suggests that echidnas only diverged from platypuses 19 to 48 million years ago. This means echidnas recently had semi-aquatic predecessors and only later recolonized the land. A number of aspects of echidna biology are consistent with an amphibious platypus-like ancestor — a streamlined body, rearward-jutting hind limbs that could act as rudders, and the contours of a duck-like bill during embryonic development.

"Platypus-like fossils are known from at least 61 million years ago. It was thought that the much shorter fossil record for echidnas, from about 13 million years ago, was just due to the patchy nature of the fossil record," Phillips said. Their new findings suggest "the lack of early echidna fossils was in fact because they simply had not evolved yet."

The researchers conjecture that marsupials could not afford a substantial invasion of aquatic environments because when they are born, they need to suckle milk constantly for weeks; newborn marsupials could drown if their mothers ever had to venture into the water.

These findings remove an apparent contradiction between fossil data and DNA evidence, said Zhe-Xi Luo, curator of vertebrate paleontology at the Carnegie Museum of Natural History in Pittsburgh.

Evolutionary biologist Peter Waddell at Purdue University at West Lafayette, Ind., explained that an earlier study based on early monotreme fossils had suggested the platypus and the echidna diverged more than 110 million years ago, while the molecular data suggested a far more recent divergence.

"Matt Phillips and colleagues have reassessed both the fossil and molecular data and concluded that the platypus-echidna split is in fact relatively recent," said mammalogist Robin Beck at the American Museum of Natural History in New York. "To put it simply, the bones and the genes appear to be telling essentially the same story, which is reassuring."

"Another interesting aspect of this study is that it suggests that the echidna evolved from an ancestor that was very like a modern platypus, despite the fact that echidnas and platypuses are anatomically very different," Beck added. "This hypothesis has been suggested before, but the current paper provides the most compelling evidence yet that this is what actually happened. Not only that, but paper suggests that the change from a platypus-like body form to an echidna-like body form appears to have happened surprisingly quickly, in less than 15 to 25 million years. That such a major change in overall morphology could happen so quickly is intriguing."

The hint that echidnas may have evolved after marsupials arrived in Australia "contradicts the common assumption that monotremes are living fossils just treading water in an evolutionary sense, and waiting to go extinct in the face of competition with 'superior' mammals, like marsupials," Phillips added.

The fossil record of monotremes remains very incomplete, particularly between about 100 and 25 million years ago, Beck said, noting that fossils that fill this 75 million year gap "might be found in Australia, South America or even Antarctica. However, there are a number of fossil sites in Australia that are 20 to 25 million years old, and the results of the current paper suggest that echidnas evolved during this period. With luck, future expeditions to these sites will discover fossil echidnas that demonstrate the change from a platypus-like to an echidna-like body form."

Since a trait often considered primitive — egg-laying — might actually have helped monotremes survive to the present day, future research could investigate whether the same holds for other characteristics of theirs. For instance, their reptile-like shoulders are poor for running fast, but they provide strong bracing. This allows for huge shoulder and arm musculature for use in rapid maneuvering in the water for the platypus or digging for echidnas, Phillips said.

The scientists detailed their findings online September 21 in the Proceedings of the National Academy of Sciences.