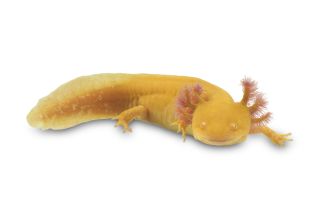 Salamanders can regrow entire limbs and regenerate parts of major organs, an ability that relies on their immune systems, research now shows.

A study of the axolotl (Ambystoma mexicanum), an aquatic salamander, reveals that immune cells called macrophages are critical in the early stages of regenerating lost limbs. Wiping out these cells permanently prevented regeneration and led to tissue scarring. The findings hint at possible strategies for tissue repair in humans.

"We can look to salamanders as a template of what perfect regeneration looks like," lead study author James Godwin said in a statement. "We need to know exactly what salamanders do and how they do it well, so we can reverse-engineer that into human therapies," added Goodwin, of the Australian Regenerative Medicine Institute (ARMI) at Monash University in Melbourne. [Ready for Med School? Test Your Body Smarts]

In mammals, macrophage cells play an important role in the immune system response to injury, arriving at a wound within two to four days. There, they engulf and digest pathogens, or infectious particles, and generate both inflammatory and anti-inflammatory signals for healing.

Now, Godwin and his colleagues have shown that macrophages are essential for salamanders' superherolike ability to sprout new limbs. The researchers studied the biochemical processes that occurred in salamanders at the site of a limb amputation. They then wiped out some or all of the macrophage cells to determine whether these cells were essential for regrowing the limbs.

Signals of inflammation were detected at the wound sites within one day of the amputations. Unexpectedly, anti-inflammatory signals, which normally arrive later in mammals recovering from injury, were also present at that time. Along with these signals, the researchers detected macrophages at the wound, peaking in number around four to six days after the injury.

To investigate the role of macrophages in salamander limb regeneration, the researchers injected the animals with a chemical substance that destroys or "depletes" these cells. The macrophage levels were either partially or fully depleted.

Once the salamanders replenished their macrophage levels, the researchers re-amputated the animals' limb stumps, which then fully regenerated at the normal rate. Collectively, these findings suggest macrophages are essential to the salamanders' remarkable wound-healing abilities.

Studying the regenerative abilities of salamanders could offer insight into treating spinal cord and brain injuries in humans, the researchers say. Furthermore, the knowledge might lead to new treatments for heart and liver diseases or recovery from surgery, by preventing harmful scarring.

Macrophages are already known to play a vital role in organ and tissue development in mouse embryos. They produce small signaling molecules that activate other types of cells that promote the growth of new limbs and the healing of wounds.

Many animals may have a capability for tissue regeneration that has been turned off as the result of evolution, but it might be possible to reactivate the process, Godwin said.

The findings were detailed today (May 20) in the journal Proceedings of the National Academy of Sciences.