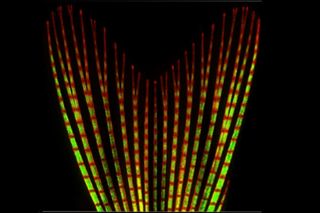 With the goal of finding ways to regenerate lost or injured body parts, researchers funded by the National Institutes of Health are exploring the strategies that some organisms use to regrow missing cells, organs and appendages. Here are a few examples.

Planarians are tiny freshwater flatworms — about the size of toenail clippings — that can re-form from slivers 1/300th of their original size. To do this, planarians use stem cells, called cNeoblasts, that have the ability to become almost any cell type in the body. Researchers at the Whitehead Institute for Biomedical Research studied the genes that are active in these stem cells to determine which of them are key players.

The researchers identified 10 “renewal” genes that help the stem cells create more like themselves. In addition, the scientists pinpointed two genes that trigger stem cells to become different types and also have roles in renewal. Because half of planarians’ genes have parallels in people, the scientists aim to use their findings to find regenerative genes in human embryonic stem cells.

Zebrafish, blue-and-white-striped fish that grow to be about 1.5 inches long, can regrow fins. To study how, scientists at Duke University Medical Center generated zebrafish with depleted levels of cells responsible for creating bone. These cells, called osteoblasts, normally increase in number after a fish loses a fin. The researchers expected that when osteoblast-deficient fish lost fins, they wouldn’t be able to regenerate them as quicklyas those with normal levels of osteoblasts, if they could regenerate their fins at all. Surprisingly, all of the fish in the experiment regrew their fins, with recovery occurring at normal rates. Learning more about this process could aid the development of therapies for bone injury or loss in humans.

Sticking with the Same

Scientists at Washington University in St. Louis identified another zebrafish regeneration strategy by tracking how individual cells behaved in the stump of an amputated fin. One possibility was that adult nerve, bone and skin cells that make up the fin would revert into stem cells with the potential to become other cell types. However, this study showed that adult cells maintained their identities during regeneration, with skin cells in the stump only giving rise to skin cells in the new fin. This discovery suggests that inducing the cells that are already present to grow again could be an additional approach to replacing lost or injured tissues.

Gene Off, Healing On

Yet another technique for promoting regeneration might be found in turning genes off. Several years ago, researchers at The Wistar Institute discovered that inactivating a single gene allowed holes in mouse ears to close without scarring. The researchers determined that this breed of mice has an inactive version of a gene involved in regulating cell growth and division. The finding offers new insight into regeneration in a mammal and could guide the direction of future research.

While these results hold promise for the development of treatments to replace or repair human tissue, they also illustrate the complexity of regeneration and raise such questions as how organisms know what’s missing and how they prevent replacement tissues from cancerlike overgrowth.

Fishing for Complements: Zebrafish as a Model Organism

Once Upon a Stem Cell