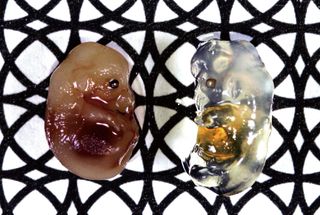 A photo of two embryos taken with a black and white pattern as background. The right embryo was incubated in the ScaleA2 solution for 2 weeks. The solution stops light scattering in the embryo, but not light absorption, so pigmentation in the liver and eye is still visible.
(Image: © Hama et al, Nat. Neuro., 2011. )

Scientists are seeing deeper into the brain than ever before with the help of a new technique that allows them to turn tissues transparent.

So far, the researchers have used the technique, called Sca/e, to look at the brain cells and blood vessels in a mouse brain, developing stunning three-dimensional videos and images. [View images and videos of Scale treated brains]

"Our current experiments are focused on the mouse brain, but applications are neither limited to mice, nor to the brain," study researcher Atsushi Miyawaki, of RIKEN Brain Science Institute in Japan, said in a statement. "We envision using Scale on other organs such as the heart, muscles and kidneys, and on tissues from primate and human biopsy samples."

Unlike previous techniques to make tissues transparent, Scale, which uses a simple liquid, doesn't interfere with the fluorescent dyes scientists use to highlight certain tissues.

By labeling specific types of cells with different fluorescent colors, researchers can see how they interact inside tissues. The Scale technique can be used in concert with the "brainbow" labeling developed in 2007, which labels brain cells with 90 different colors; the two techniques would visualize how different kinds of brain cells interact in three dimensions, instead of two.

The treatment also enables researchers to see deep into tissues — up to 0.15 inches (4 millimeters) into the brain — a distance that is limited only by current microscopes' ability to "see" at different depths, which the researchers hope will be improved in the near future.

They are currently studying the anatomical differences between different areas of the mouse brain. They are also working on developing a similar technique that could be used on living samples, though this one wouldn't reach nearly as far into tissues.

"We are currently investigating another, milder candidate reagent, which would allow us to study live tissue in the same way, at somewhat lower levels of transparency," Miyawaki said. "This would open the door to experiments that have simply never been possible before."

The study was published Aug. 30 in the journal Nature Neuroscience.