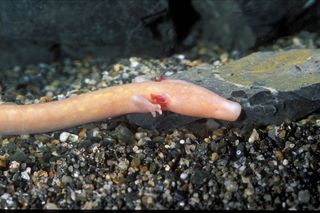 Shaped by millions of years living in darkness, the blind salamander is equipped with poorly developed eyes and three external gills on each side of its head. Its skin shows barely any trace of pigment; and juveniles sometimes show a faded spotting.
(Image: © Olivier Guillaume.)

Blind salamanders once thought to be baby dragons can live at least as long as most people, scientists now find. Adults of this species live nearly 69 years on average, with a predicted maximum age of more than 100 years, three times longer than related species

Surprisingly, the long-lived amphibian doesn't seem to have an especially low metabolism nor unusual levels of protective antioxidant molecules to explain why it lives so long. As such, this salamander could help uncover mechanisms that could help keep us young.

The olm or proteus (Proteus anguinus) lives in the limestone caves of southern Europe. The amphibian is sometimes confusingly known as the "human fish" — "fish" because it lives its entire life in the water, and "human" because its pink skin resembles that of nearby people.

The olm has atrophied eyes and virtually no skin pigment — both adaptations to its largely lightless existence. Due to their snake-like bodies, these small amphibians were once thought to be baby dragons.

Zoologists have been intrigued by the olm for centuries because of its longevity, as it often lives more than 70 years in zoos. The salamander's longevity is especially unusual given its tiny size — the 9.8- to 11.8-inch-long (25- to 30-cm-long) creature weighs just 0.5 to 0.7 ounces (15 to 20 grams). Small creatures often don't live as long as larger animals, which researchers suspect might be due to the higher metabolisms small organisms usually have that are thought to essentially burn the animals out.

In 1952, scientists equipped a French cave with riverbed-like basins that faithfully reproduced the salamander's natural habitat. This station at Moulis in France, operated by the French National Center for Scientific Research, serves as the world's only successful breeding program for the olm, with more than 400 individuals living there.

"The cave station is a bit like 'Dr. No's' laboratory in the James Bond films," said researcher Yann Voituron, an ecophysiologist at the Université Claude Bernard Lyon in France.

Based on analysis of these salamanders, Voituron and his colleagues estimated the life spans of the olm and other aspects of their lives in order to decipher the strategies that enable this species to live so long.

"We knew for a long time that it had a long life span, but we never had enough data to check it for sure," Voituron said.

The olm reaches sexual maturity at 15.6 years and lays, on average, 35 eggs every 12.5 years. The oldest salamanders at the cave are now at least 48 — most are probably now about 58 years old since they were collected as juveniles of unknown age — and they showed no drop in survival after 40.

To estimate how long the olm might live, the researchers found that in related species, an organism's average life span ranged from 10 percent to 67 percent of the longest life span known for that species. If one is as conservative as possible, this suggests the maximum life span of the olm is roughly 102 years.

When compared with its closest relatives, although the olm lives for much longer, it apparently does not possess either a markedly different metabolism rate or unusual antioxidant activity — the two factors most often cited for enhancing life span.

So why might the olm have such an outstanding life span? It might live a long time by not living very much at all.

"Although the olm does not have a remarkably low metabolic rate, it is extremely inactive during its life," Voituron told LiveScience. "It has no predators in the caves, so it's not stressed. It just needs to move sometimes to feed and reproduce one time per 12 years."

This salamander could represent a new organism that scientists can use to understand aging. "We can look at the usual genes associated with increases in life span, and maybe hope to detect something new," Voituron said.

Although the researchers would love to analyze the salamanders on a cellular level — say, look at their mitochondria, which essentially generate the power that drives cells — the mass of tissue they would need to extract for study would kill the creatures, and the researchers don't have that many to work with.

"We just have to find how to work with them without killing them," Voituron said.

The scientists detailed their findings online July 21 in the journal Biology Letters.