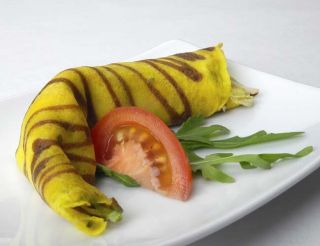 Every two months, Lufthansa enlists the expertise of a new star chef to prepare its first and business class menus on intercontinental flights from Germany. During the months of May and June, first and business class passengers on Lufthansa can look forward to meals prepared by Swiss chef Reto Mathis. Appetizers on the first class menu include crayfish and avocado timbale with lime crème fraiche. Entrees include traditional Swiss escalope guinea fowl with air dried beef and sage, pumpkin goulash and curd spatzle. German chef Ralf Zacherl has been creating the kid-tested children’s menu since May 2007. Featured here is 'Tiger’s Tail' — a rolled pancake filled with chicken and vegetables. For dessert is the 'Little Martian': an alien creature made from mousse and strawberry puree with chocolate drops for eyes and licorice sticks for antennae. Image
(Image: © Lufthansa)

To many people, antioxidants and anti-aging go hand-in-hand. Antioxidants, which show up in everything from dietary supplements to cosmetics, are touted as the antidote to cell-damaging free radicals and the key to long-lasting youth.

But a new study on roundworms suggests that the relationship between aging and antioxidants isn't so simple.

The research, published in June in the journal Genetics, revealed that roundworms with genetic mutations that slowed their metabolism lived longer than regular roundworms — even though the mutated worms showed no evidence of increased protection from free radicals.

That means that the rate of living might be more important to lifespan than free radical damage, said Siegfried Hekimi, a molecular geneticist at McGill University and the lead author of the paper.

"You do not need to have lowered free radical production to live long," Hekimi said.

Free radicals and aging have been linked since the 1950s, when researchers argued that these unstable molecules could damage cells. Over many years of normal function, the theory goes, the damage accumulates and the organism ages. Antioxidants help inhibit free radical production and thus protect cells from damage.

But the evidence for a straightforward relationship between free radicals and aging has been mixed. [Related: 7 Ways the Mind and Body Change With Age]

To experiment further, Hekimi and his colleagues used C. elegans, a 1 millimeter-long roundworm. They induced random mutations into the worms and picked out those that exhibited slow growth and slow physiological behaviors, like defecation. They then exposed the worms to several compounds that raise the concentration of oxygen-containing free radicals inside cells.

Although all 10 types of mutated worms lived several days longer than their non-mutated counterparts (a significant chunk of time for a creature with a maximum lifespan of three weeks), they showed no extra resistance to the stress caused by the free radicals. In most cases, the mutants were actually more sensitive than non-mutants.

The study "fits with some of the work that's coming out of the field," said Siu Sylvia Lee, a geneticist at Cornell University who was not involved in the study. Though free radicals are likely somehow involved in aging, she said, this and other studies like it suggest that the relationship between free radicals and aging isn't a straight correlation.

Hekimi isn't sure what makes the slow-living worms live longer or what role free radicals do play. But while it's too early to extrapolate the results to humans, the research does suggest consumers should be cautious about buying into antioxidant hype, he said.

"This is some data that suggests that even in principle, [antioxidants] cannot do you any good," he said. "Free radicals might still be involved in aging in complex ways, but this simple notion of ‘They're there, they're toxic, they cause aging,' that seems to be wrong."