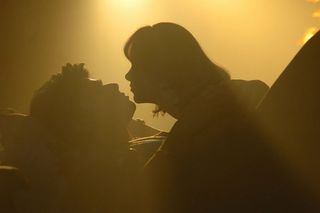 Older men who shack up with much younger women keep the grim reaper at bay for the human population and extend our species' lifespan, new research claims.

Even beyond movie stars and Playboy's Hugh Hefner, there is a tendency for older men to partner with younger women, according to the study, published in the Aug. 29 edition of PLoS ONE. In less developed, traditional societies, males are about 5 to 15 years older than their female partners. In the United States and Europe, guys are an average of two years senior to their partners.

More interesting, when old men father children, their genes seem to increase the lifespan of both sexes over evolutionary time.

Women often lose their reproductive capacity around age 50, but if men can still reproduce into their 70s, Darwin would say it's advantageous for males to live longer lives providing they can hook up with a woman capable of reproducing. Natural selection should favor longevity-boosting genes, which would get passed down from fathers to both sons and daughters. So women would benefit as well in future generations, the scientists say.

Result: Over time, the older-guy-with-younger-gal lifestyle would lift the lifespan ceiling for both men and women in the next generations and so on.

"By increasing the survival of men you have a spillover effect on women because men pass their genes to children of both sexes," said study team member Cedric Puleston, a doctoral candidate at Stanford University.

Anthropologist Cheryl Jamison of Indiana University, who was not involved in the research, called the results "fascinating."

From an evolutionary perspective, women who can no longer reproduce are non-players, and since "it takes two," men partnered with menopausal women are also irrelevant.

Following that idea, natural selection should select for harmful mutations that impact women after menopause. Over time, the discriminating genes would accumulate in the population causing what evolutionary biologist William Hamilton called the "wall of death," in which mortality of women spikes at the onset of menopause.

Population records and everyday observations indicate that's not the case. Life expectancy for men and women in today's industrialized countries is 75 to 85 years, with mortality increasing gradually, not abruptly, following female menopause.

To figure out whether male fertility could help explain human longevity, Shripad Tuljapurkar of Stanford University and his colleagues examined lifespan and fertility data from both men and women.

They studied four societies thought to closely mimic lifestyles of our ancestors, including two hunter-gather groups, the Dobe !Kung of the Kalahari and the Ache of Paraguay (one of the most isolated populations in the world), as well as the Yanomamo forager-farmers and an indigenous group in Bolivia called the Tsimane. The research team also looked at farming villages in Gambia and a group of modern Canadians.

In all six groups, women stopped having children on average by their 50s, while some men continued to reproduce. The age after which men showed no reproduction varied among the groups and included:

Until now, the most popular explanation for the bounty of over-55s, called the "grandmother hypothesis," suggested women get a life extension in order to care for their children and grandchildren.

The new findings don't contradict that hypothesis, but help explain how men give women another boost over the "wall of death."

"I don’t think the finding conflicts with the grandmother hypothesis but rather that it can be considered along with it as explanations for human longevity—there doesn’t have to be a single gene or single selective factor," Jamison told LiveScience.

But why do men choose younger mates and females prefer older men?

"There is a lot of evidence from evolutionary psychology that men are seeking younger women and women are seeking older men," said anthropologist Martin Fieder of the University of Vienna, who was not involved in the current study.

Cases in point: At the age of 26, Anna Nicole Smith married 89-year-old Jeremiah Howard Marshall II. And in 1995, actor Tony Randall, then 75, married and had two kids with Heather Harlan, who was 24 at the time. Last month, 90-year-old Nanu Ram Jogi from India reportedly became the world's oldest father when he announced his 21st child.

Evolutionary psychologists argue that older men have more resources to protect and care for the family, while younger, more fertile women give their male partners better means of passing along genes.

In a study of about 10,000 Swedish men and women, Fieder and his colleagues have found that men had the most children if they were partnered with women about six years younger than themselves.

So the benefits of "age-defying" couples go both ways. Plus, the human species gets a boost.