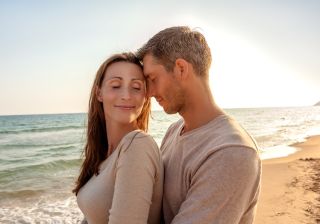 Men may be hardwired to like women's breasts, though scientists debate the reasons why.
(Image: © altafulla / Shutterstock.com)

Why do straight men devote so much headspace to those big, bulbous bags of fat drooping from women's chests? Scientists have never satisfactorily explained men's curious breast fixation, but theorists are gonna theorize. So let's take a tour of the sexy speculation surrounding the human bosom — with a few stops to explain why it's so hard to figure out just why breasts hold such allure.

Mammary glands are a defining feature of mammals, but humans seem unique in granting mammaries a large sexual role. That's not to say interest in nipples is entirely unheard of elsewhere in the animal kingdom: In the book "Biological Exuberance: Animal Homosexuality and Natural Diversity" (Stonewall Inn Editions, 1999), Canadian biologist Bruce Bagemihl notes that a couple of primate species, including humanity's close relative the bonobo, have been seen stimulating their own nipples while masturbating. Still, few mammals other than humans mate face-to-face (the behavior makes headlines when seen in the wild), so nipple stimulation isn't generally part of the script.

Researchers have long speculated that humans evolved the fatty deposits around the female mammary glands for sexual reasons. Anthropologist Owen Lovejoy argued that evolution put a bull's-eye around both female and male reproductive organs in order to promote pair bonding. In this hypothesis, it wasn't just the female breast that got a lift; men acquired relatively large penises for their body size, too. [Why Do Women Have Breasts?]

Another long-standing theory holds that breasts evolved as a way to signal to men that the woman attached to them was nutritionally advantaged and youthful — and thus, a promising mate. Studies finding that men prefer large breasts and a high waist-to-hip ratio bolster the notion that an hourglass shape communicates youth and fertility. A 2004 study in the Proceedings of the Royal Society B even found that women with large breasts have higher levels of the hormone estradiol mid-cycle, which could increase fertility.

But there are pitfalls to this line of work. For one thing, it's not actually clear that breasts are universally adored. In a 1951 study of 191 cultures, anthropologist Clellan Ford and ethologist Frank Beach reported that breasts were considered sexually important to men in 13 of those cultures. Of those, nine cultures preferred large breasts. Two — the Azande and Ganda of Africa — found long, pendulous breasts most attractive. Another two — the Maasai of Africa and Manus of the South Pacific — liked breasts that were upright and "hemispherical," but not necessarily large. Thirteen cultures also reported breast simulation during sex, but only three of those overlapped with the societies where men reported finding breasts important for sexual attraction.

"In any case, they regarded it as unnatural, perverted behavior, and found it difficult to believe that men would become sexually aroused by women's breasts, or that women would find such activities pleasurable," Dettwyler wrote.

Even if there is some biological underpinning for an interest in bosoms, it might vary by culture. A 2011 study compared men's preferences for breast size, symmetry, and areola size and color in Papua New Guina, Samoa and New Zealand and found that men from Papua New Guinea preferred larger breasts than men from the other two islands. Because the men surveyed from Papua New Guinea hailed from more of a subsistence culture than the men in Samoa or New Zealand, the results support the idea that in places of scarcity, padded bustlines could signal a well-fed woman with reserves for pregnancy and childrearing, the researchers wrote. Areola size and color preferences were highly idiosyncratic between cultures.

The main job of breasts, of course, is to feed offspring. Some researchers think that sexual interest in breasts simply hijacks the breastfeeding circuitry and uses it for another purpose.

Larry Young, a professor of psychiatry at Emory University who studies the neurological basis of complex social behaviors, thinks human evolution has harnessed an ancient neural circuit that originally evolved to strengthen the mother-infant bond during breastfeeding, and now uses this brain circuitry to strengthen the bond between couples as well. The result? Men, like babies, love breasts.

When a woman's nipples are stimulated during breastfeeding, the neurochemical oxytocin, otherwise known as the "love drug," floods her brain, helping to focus her attention and affection on her baby. But research over the past few years has shown that in humans, this circuitry isn't reserved exclusively for infants. [The Cleavage Countdown: 8 Facts About Breasts]

Recent studies have found that nipple stimulation enhances sexual arousal in the great majority of women, and it activates the same brain areas as vaginal and clitoral stimulation. When a sexual partner touches, massages or nibbles a woman's breasts, Young said, this triggers the release of oxytocin in the woman's brain, just like what happens when a baby nurses. But in this context, the oxytocin focuses the woman's attention on her sexual partner, strengthening her desire to bond with this person.

In other words, men can make themselves more desirable by stimulating a woman's breasts during foreplay and sex. Evolution has, in a sense, made men want to do this. According to Young, the theory "just makes a lot of sense." Young elaborated on the theory in his book, "The Chemistry Between Us" (Current Hardcover, 2012), co-authored by Brian Alexander.

Attraction to breasts "is a brain organization effect that occurs in straight males when they go through puberty," Young told Live Science. "Evolution has selected for this brain organization in men that makes them attracted to the breasts in a sexual context, because the outcome is that it activates the female bonding circuit, making women feel more bonded with him. It's a behavior that males have evolved in order to stimulate the female's maternal bonding circuitry." [Why Do Men Have Nipples]

So, why did this evolutionary change happen in humans, and not in other breastfeeding mammals? Young thinks it's because we form monogamous relationships, whereas 97 percent of mammals do not. "Secondly, it might have to do with the fact that we are upright and have face-to-face sex, which provides more opportunity for nipple stimulation during sex. In monogamous voles, for example, the nipples are hanging toward the ground and the voles mate from behind, so this didn't evolve," he said. "So, maybe the nature of our sexuality has allowed greater access to the breasts."

Young said competing theories of men's breast fixation don't stand up to scrutiny. For example, the argument that men tend to select full-breasted women because they think these women's breast fat will make them better at nourishing babies falls short when one considers that "sperm is cheap" compared with eggs, and men don't need to be choosy.

But like any evolutionary explanation for breasts, Young's theory runs into cultural controversy.

"Always important whenever evolutionary biologists suggest a universal reason for a behavior and emotion: how about the cultural differences?" Rutgers University anthropologist Fran Mascia-Lees wrote in an email to Live Science.

Young responded that there are not enough studies looking at breast stimulation during foreplay across cultures to rule out the importance of the nipple-oxytocin bonding loop. Notably, men often like nipple stimulation, too. A 2006 study published in the Journal of Sexual Medicine found that in a sample of undergraduate men in the United Kingdom, 51.7 percent found nipple stimulation arousing. About 82 percent of women said the same. Male nipples are a vestige of prenatal development in men, but they are hooked up to nerves and blood vessels, just like female nipples.

However, less is known about the innervation of nipples in men, studies on how nipple stimulation contributes to their sexual arousal are lacking, the researchers wrote. Perhaps the real quandary isn't why the female breast is so fetishized, but why we don't ask more questions about what's on men's chests.

Editor's Note: This article was first published on Sept. 26, 2012; it was updated to include more research and information on theories behind men's love of breasts.