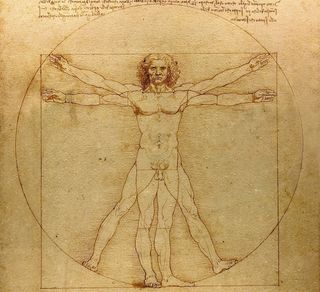 Nipples are a vestige of our early days in the womb.
(Image: © Public domain)

Men can't nurse babies, so why on Earth do they have nipples?

The answer has to do with how humans develop in the womb, said Ian Tattersall, a paleoanthropologist at the American Museum of Natural History in New York City.

"Basically, males and females are all built from the same genetic blueprint," Tattersall told Live Science. "Then, [they] develop in slightly different directions [in utero and] particularly after we hit puberty." [Men vs. Women: Our Key Physical Differences Explained]

During the first several weeks, male and female embryos follow the same blueprint, which includes the development of nipples. However, at about six to seven weeks of gestation, a gene on the Y chromosome induces changes that lead to the development of the testes, the organ that makes and stores sperm and produces testosterone, according to the book "Exploring the Biological Contributions to Human Health: Does Sex Matter?" (National Academies Press, 2001).

After the testes are formed, the male fetus begins producing testosterone at about nine weeks of gestation, changing the genetic activity of cells in the genitals and brain. But by then, those nipples aren't going anywhere.

Human development explains why males have nipples. But why do men keep this vestigial structure? (A vestigial body part does not serve an evolutionary purpose.)

Furthermore, just because men don't need nipples, it's not exactly an evolutionary priority to get rid of them.

"The fact is that we carry a lot of evolutionary baggage around with us," Tattersall said. "Natural selection is not hovering there all of the time to get rid of things we absolutely don't need."