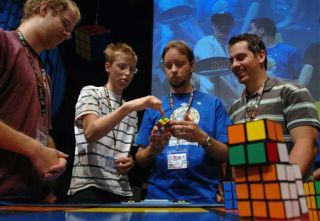 Players of Sweden solve a Rubik's cube during the qualification session for the 2007 Rubik's Cube World Championship in Budapest, Hungary, Friday, Oct. 5, 2007. Hundreds of competitors from 32 countries will take part in the three-day event, with prizes to be awarded in 17 categories, with experts trying to solve the classic 3x3 cube and its variations while blindfolded, with one hand, or with their feet.
(Image: © AP Photo/Bela Szandelszky)

BUDAPEST, Hungary (AP) — After 25 years, the cube is coming home.

Hundreds of competitors are meeting for the fourth Rubik's Cube world championship Friday in the Hungarian capital, which hosted the first such event in 1982.

The mechanical puzzle invented by Hungarian Erno Rubik sparked a global craze in the early 1980s. Some 7 million cubes were sold last year.

Competitors from 32 countries will take part in the three-day event. Prizes will be awarded in 17 categories, with experts trying to solve the classic 3x3 cube and its variations while blindfolded, with one hand, or with their feet.

The current world record for solving the 3x3 cube — which has six sides of a different color with nine tiles on each side — is 9.86 seconds, set by Thibaut Jacquinot of France in May at the Spanish Open.

Matyas Kuti, 14, is one of the host country's biggest hopes for a top finish. Kuti first picked up a cube he found at home in February 2006 and began competing a few months later.

Kuti is considered a master of the blindfolded event, in which he has set 11 world records and has 24 first-place competition finishes.

He practices about three hours a day and his favorite cube is souped up with cubes rotating more easily because of filed down rough edges and silicon lubricants applied. Such alterations are legal according to the rules.

"The 5x5 cube and doing it blindfold are my favorite events,'' Kuti, from Budapest, said. "These are the most complicated versions and it's a great feeling to solve them.''

The United States is expected to have the biggest delegation, with 39 competitors. Twenty-nine cube solvers are coming from Poland, 22 from Japan and 19 from France. Solvers from Mexico, New Zealand, Lithuania and Indonesia are also taking part.

World championships were also held in Canada in 2003 and in the United States in 2005.