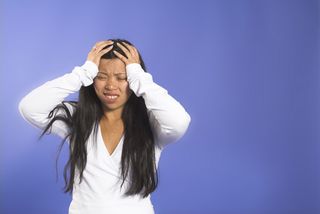 Parents can be a real pain. In fact, a new study finds teenagers with parents who experience chronic pain rate their own migraine headaches as more disabling than other teens.

While migraine headaches are thought to be inherited, the degree of associated pain varies widely among individuals. The scientists who headed up the new research suggest some of the variability is due to teens modeling their parents’ responses to their own pain.

“We want to know how much of a child’s response to migraine pain is learned and how much is hereditary,” said lead author Ann Pakalnis, a neurologist at Columbus Children’s Hospital and a professor at Ohio State University College of Medicine.

Migraines affect about 10 percent of children and adolescents in the United States, with up to 2 percent considered chronic-migraine sufferers who get 15 or more migraines each month. Symptoms include throbbing head pain, nausea, vomiting and extreme sensitivity to light. Those suffering from full-whammy migraines can be out of commission for days, while others go about their daily lives with just a light dose of pain.

The researchers surveyed 20 teens, 12 to 17 years old, who suffered from one to 15 migraines each month, as well as their parents. More than 90 percent of parents in the study reported at least one chronic-pain condition, including migraines and fibromyalgia, which is characterized by widespread pain in a person’s muscles and other tissues.

Their preliminary data, presented this week at a meeting of the American Headache Society in Chicago, revealed that parents who reported greater disabilities due to chronic pain also had adolescents who rated their migraines as more disabling than teens with no-chronic-pain parents.

The results could have implications for how doctors assess and treat migraines in teenagers.

“Sometimes we tend to leave the parents or guardians out of the treatment planning, because these are teenagers,” Pakalnis said. She suggests collecting parents’ pain history could be critical to diagnosing and treating their teens.

“No one doubts these kids suffer from migraines,” Pakalnis said. “But if we can better understand their individual level of pain, we can develop individual treatments that are best for them.”

Plus, effective treatment during the teen years could mean fewer migraine-suffering adults.

“It’s a learned response, and once these behaviors are learned I think they’re very difficult to modify,” Pakalnis told LiveScience. “Hopefully, if we can intervene when the kids are younger, then we might change how they tolerate their migraines and the degree of disability they have into adulthood.”