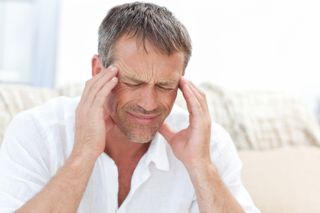 A migraine attack often causes an intense pulsing or throbbing pain in one area of the head, as well as nausea and visual disturbances.
(Image: © Man with a headache photo via Shutterstock )

A migraine is a neurological disorder characterized by over-excitability of specific areas of the brain, which usually results in an intense pulsing or throbbing pain in one area of the head. Migraines are not merely severe headaches, however; in fact, sometimes there is no head pain. Other symptoms include nausea, vomiting and sensitivity to light and sound.

More than 37 million Americans, mostly between the ages of 15 to 55, suffer from migraines, according to the National Headache Foundation. Migraines are three times more common in women than in men, according to the U.S. National Library of Medicine (NLM).

Though no one is completely certain on the origin of migraines, some researchers think migraines may be inherited and related to genes that control the activity of some brain cells. Most migraine sufferers — 70 to 80 percent of them — have a family history of migraines, according to the National Headache Foundation. [Related: Genetic Link to Migraines Identified]

Migraine pain occurs when excited brain cells trigger the trigeminal nerve, one of five nerves located in the brain, to release chemicals that irritate and cause blood vessels on the surface of the brain to swell, according to the National Headache Foundation. The swollen blood vessels send pain signals to the brainstem, which processes pain information. The pain is typically felt around the eyes or temples. Pain can also occur in the face, sinus, jaw or neck area. During a full-blown attack, many people are sensitive to anything touching their head. Combing their hair or shaving may be painful or unpleasant.

It is important to note that there is a difference in the cause of migraines and the triggers for migraines. A cause is what makes a person susceptible to migraines, while a trigger is what may bring on a migraine. "Many patients know what will trigger a migraine in them," said Dr. Niket Sonpal, an assistant professor of clinical medicine in the department of biomedical sciences at the Touro College of Medicine in Harlem, New York​. "Common triggers include certain foods, drinks, bright lights, some odors and stress, to name a few."

The National Headache Foundation lists these factors that can trigger migraine attacks:

Many people will experience certain symptoms that indicate they will soon have a migraine. These warning signs can happen minutes or hours before an actual migraine. Some of these symptoms include blurred vision, tingling in the arms or face, difficulty speaking or loss of peripheral vision.

Roughly one-third of those who get migraines can predict an oncoming migraine by seeing an "aura" or visual disturbances such as flashing lights, zig-zag lines in front of the eyes or a temporary loss of vision, according to the National Institute of Neurological Disorders and Stroke.

The pain associated with migraines, as well as the nausea, vomiting, extreme sensitivity to light and sound, and other accompanying symptoms can last hours to days before subsiding, according to the Mayo Clinic.

The most common time for a migraine pain to begin is 6 a.m., according to the American Migraine Foundation.

There are many different types of migraines. The type of migraine often corresponds with the accompanying symptoms.

Migraines that affect the eyes are often called ocular, optical or ophthalmic migraines. "The terms are pretty interchangeable," said Sonpal. "Ocular migraines cause vision loss or blindness lasting less than an hour, along with a migraine headache. Physicians will sometimes call these headaches 'retinal,' or 'ophthalmic' but essentially they are the same thing. These headaches, through rare, are very serious as they should be investigated by a physician right away.”

Complex migraines or atypical migraines are associated with extended or exaggerated visual auras.

Sporadic hemiplegic migraines are rare and can cause symptoms such as fever, prolonged weakness, seizures and coma. Neurological symptoms such as memory loss and problems paying attention can last for weeks or months after the person has recovered from the migraine. Some may even develop permanent difficulty coordinating movements, rapid, involuntary eye movements called nystagmus and mild to severe intellectual disability, according to NLM.

Vestibular migraines are those that are associated with vertigo. The person may experience dizziness or loss of balance during a migraine. Nausea and vomiting are common symptoms of this type of migraine.

Some people may opt to seek medical attention if their migraines are frequent or particularly severe; however, migraines typically can be helped with at-home treatments.

At-home treatments can include going to a dark, quiet room to rest, applying cold packs to the painful area of the head and taking over-the counter pain medication such as ibuprofen or aspirin. Avoiding triggers has also been helpful for many.

Sonpal explained that triptan migraine medications are structurally similar to serotonin, a neural hormone. These medications target one of the underlying causes of migraines and help reduce the vascular inflammation associated with migraines. These cannot be taken, however, in patients who are pregnant or have coronary artery disease. If these medications don’t work, then ergotamine, certain anti-emetic medications and even steroids may be prescribed.

"Preventive medications are aimed are preventing migraines, and have been shown to reduce frequency of migraines by 50 percent," said Sonpal. Beta blockers such as propranolol can help to stabilize the blood vessels in the brain and are used when the patient has three but less than or equal to 14 migraines a month. When a person has more than 15 migraines per month, the physician may consider topirimate as a treatment option. It targets several receptors in the brain to help with the pain and prevent migraines.