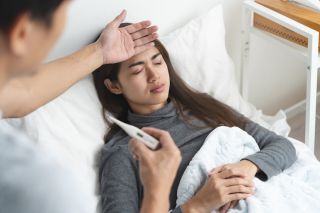 The signature symptoms of meningitis are headache, sudden fever and a stiff neck.
(Image: © Shutterstock)

Meningitis is an infection of the protective membranes that cover the brain and spinal cord, which are called the meninges.

The illness is usually caused by a bacterial or viral infection. In rare cases, a fungus, parasite or amoeba may also cause meningitis. There are noninfectious causes of meningitis, too, such as some cancers, lupus, head injuries or brain surgery, according to the Centers for Disease Control and Prevention (CDC).

People of any age can get meningitis, and those affected typically have a fever and a bad headache. And because the lining of the brain and spinal cord become inflamed, the neck swells, triggering a stiff neck, said Dr. Paul Sax, an infectious disease specialist at Brigham and Women's Hospital in Boston.

The symptoms of meningitis can vary quite widely in their severity, Sax said. Almost all people say they are tired, don't feel right and can't think straight, and some types of meningitis may cause a red rash on the body, he said.

The most common form of the disease in the United States is viral meningitis, which is usually less severe than meningitis caused by bacteria. Bacterial meningitis is very serious and can be deadly but is fairly rare in the U.S., Sax told Live Science, and is more common in a region known as the 'meningitis belt' in sub-Saharan Africa.

About 3,000 people in the U.S. are diagnosed with bacterial meningitis each year, and most of them are infants, children, college students and older adults, according to Boston Children's Hospital. Between 10% to 15% of those who contract bacterial meningitis die from the infection.

Bacterial meningitis can be spread by coming into contact with an infected person's respiratory or throat secretions through coughing, sneezing, kissing or sharing food, drinks and eating utensils.

Teens and young adults, such as students in college dorms or military barracks, may be at higher risk for bacterial meningitis because of their social interactions and from living in close contact with one another.

Four of the most common bacteria species that cause meningitis include:

The most common cause of viral meningitis in the U.S. is non-polio enteroviruses, according to the CDC. Other viruses, such as the ones that cause mumps, herpes and chickenpox, measles, flu and mosquito-transmitted arboviruses (like West Nile virus), can also cause the infection.

These viruses are found in the throat and feces of infected people. People can spread viral meningitis to others by coughing or sneezing, or by coming into contact with feces, such as when a person is changing a diaper or a soiled sheet.

People can develop fungal meningitis, which is rare in the U.S., when they breathe in fungal spores that live in soil or on decaying wood, or spores found in bird or bat droppings. The illness is almost always seen in those with weakened immune systems due to HIV or organ transplant, for example, Sax said.

Some of the early signs of meningitis may come on suddenly and resemble the flu. Symptoms of bacterial meningitis usually show up three to seven days after a person is exposed to the infection, according to the CDC.

Bacterial meningitis symptoms may include:

A red or purple skin rash may appear with meningococcal meningitis as the disease progresses.

Signs of bacterial meningitis in babies may include:

Other forms of meningitis have similar symptoms to those listed above.

Brain imaging tests, such as a CT scan or an MRI, may also help doctors detect whether there is brain inflammation.

Bacterial meningitis is a serious illness that requires hospitalization, and its symptoms can quickly become life-threatening without prompt antibiotic treatment, according to the Mayo Clinic.

Fortunately, there are antibiotics that are very active against bacterial meningitis, Sax said. When a person is suspected of having meningitis, that individual is started on a broad-spectrum antibiotic, which can target many species of bacteria, and when the exact cause of the infection is determined, treatment is changed to a narrower, more specific antibiotic.

Most people recover from bacterial meningitis, but some individuals may develop permanent complications, such as brain damage, hearing loss, learning disabilities and memory problems as a result of the infection, according to the CDC.

There is no specific treatment for viral meningitis other than rest, fluids and over-the-counter pain relievers. Most people with the mild form of the viral infection recover within seven to 10 days, according to the CDC.

Fungal meningitis is treated with high doses of antifungal medications that are often given intravenously.

There are very good vaccines that can prevent some of the most common causes of bacterial meningitis, Sax said. One of the great advances in pediatric medicine has been the development of the H. influenzae type b vaccine (Hib), which has almost completely eliminated this form of bacterial meningitis in children in the U.S., he said.

According to Boston Children's Hospital, the following vaccines can help prevent bacterial meningitis:

Two other vaccines, serogroup B meningococcal vaccine and pneumococcal polysaccharide vaccine 23-valent, may be recommended for children or adults at high risk for developing meningitis.