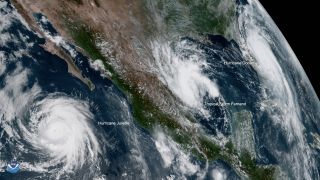 An image from the National Oceanic and Atmospheric Administration (NOAA)'s GOES-West satellite shows three tropical storms near North America at 1:20 pm EST Sept 3, 2019. From left to right: Hurricane Juliette, a Category 3 storm, is not expected to impact land; Tropical Storm Fernand is expected to landfall in Mexico; Hurricane Dorian, now a Category 2 after its devastation of the northwest Bahamas, has grown in area and is making its way toward Florida.
(Image: © NOAA)

Tropical Storm Fernand formed in the Gulf of Mexico and has triggered tropical storm warnings across the northeast Mexican coastline, from Barra del Tordo to the mouth of the Rio Grande River at the far-southeastern point of Texas near Brownsville. According to an advisory today (Sept. 3) from the National Hurricane Center (NHC), Fernand should bring tropical storm conditions to the region late Wednesday (Sept. 4) or early Thursday (Sept. 5), with rainfall being the most serious threat. Parts of South Texas can also expect significant rain, the center reported. As of 1 pm EDT, Fernand was packing maximum sustained winds of 40 mph (65 km/h).

"Conditions appear conducive for gradual strengthening before the cyclone moves into Mexico. However, the broad and large nature of the circulation is likely to prevent rapid intensification before landfall," the NHC wrote in the advisory.

That doesn't mean Fernand isn't dangerous, according to the center.

"The primary threat from this system will be heavy rainfall that could produce flooding and mudslides, especially in the mountainous areas of Mexico," the update said.

If you're in the affected region, here's Live Science's explainer on how to prepare for the storm before it arrives.