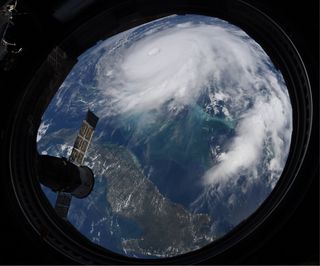 NASA astronaut Christian Koch snapped this image of Hurricane Dorian from the International Space Station on Sept. 2, 2019. The station orbits more than 200 miles (320 kilometers) above the Earth.
(Image: © NASA)

After pummeling the Bahamas over the weekend through today, Hurricane Dorian is starting to make a turn toward the northwest and is expected to move dangerously close to the east coast of Florida later today (Sept. 3) and tomorrow, according to the National Hurricane Center (NHC).

Dorian, downgraded to a Category 3 storm with sustained winds reaching 120 mph (195 km/h), is inching north of Grand Bahama, where videos and images show near total devastation. As of 8 a.m. ET, the hurricane was still moving at a crawl, some 1 mph (2 km/h) in the northwest direction, according to an NHC update. That northwestward movement is expected to pick up later today and tonight, likely as a result of a low-pressure system that moved down from the Great Lakes region, Live Science previously reported.

Though the hurricane is not expected to make landfall on Florida’s coast, it will get awfully close and there's always a chance some atmospheric nudge could pull the extremely dangerous core onto land there, Live Science previously reported. The 8 a.m. forecast has Dorian moving very close to the Georgia and South Carolina coasts tomorrow night and Thursday (Sept. 5) and then near or over the coast of North Carolina late Thursday.

"Although the official forecast does not show Dorian making landfall along the Florida east coast, users are reminded not to [focus] on the exact forecast track," the NHC said in its 8 a.m. update. "A relatively small deviation to the left of this track could bring the core of the hurricane near or over the coastline."

Regardless of whether Hurricane Dorian makes landfall in Florida, even a side-swipe will bring extremely dangerous conditions to parts of the coastline.

"Life-threatening storm surge and dangerous hurricane-force winds are expected along portions of the Florida east coast and the coasts of Georgia and South Carolina, regardless of the exact track of Dorian's center," the update said.

Hurricane warnings and watches extend from Florida all the way up to South Santee River in South Carolina.

Right now, the NHC is asking that everyone on Grand Bahama to remain in shelter, as the island will continue to be walloped by the hurricane's devastating winds and high storm surge for several more hours.