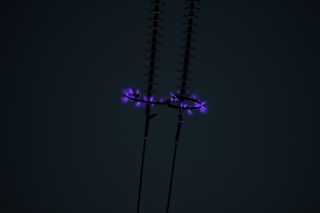 St. Elmo's fire is a persistent blue glow that occasionally appears near pointy objects during storms. The name is something of a misnomer, as the electric phenomenon has more in common with lightning or the northern lights than it does with flame.

Captains of the seas and skies know St. Elmo's fire best, as the ethereal light has long been sighted clinging to the masts of ships and more recently the wings of planes. Mariners have noted the spectacle for thousands of years, but only in the last century and a half have scientists learned enough about the structure of matter to understand why the phenomenon takes place. It's not gods or saints that kindle the enigmatic fire, but one of the five states of matter: plasma.

Reports of blue lights dimly flickering from the rigs of ships date back to antiquity, when the Greeks and Romans interpreted the sight as visitations from the demigod twins Castor and Pollux. Considered saviors of those in danger, the twins' apparition would have come as a hopeful sign to sailors weathering a storm.

The phenomenon later got its modern name from St. Erasmus, or St. Elmo for short, who lived in the third century. St. Elmo gained fame as the patron saint of sailors and intestinal distress, after he was reportedly killed by disemboweling. Sailors prayed to him in moments of distress and continued to interpret the glow of St. Elmo's fire dancing and hissing on the tips of their boats as a favorable omen.

A scientific understanding of St. Elmo's fire became possible only after British chemist and physicist William Crookes produced what he called "radiant matter" through his work with vacuum tubes in 1879. The discovery of the electron came two decades later, revealing that the world was made of more than neutral atoms. Finding that atoms contained smaller, charged particles proved essential to understanding why Crookes's matter shined, launching the whole new field of plasma physics.

Plasma occurs when excess energy breaks up atoms in a neutral gas to create a charged gas. One way to create plasma is with heat. For example, heating solid ice breaks molecular crystals into liquid water, and boiling liquid water liberates water molecules to rise as a gaseous vapor. Continue to dump energy into the vapor (by heating it past 21,000 degrees Fahrenheit, or 12,000 degrees Celsius, for instance), and the atoms in the water molecules get roughed up, losing their electrons and becoming charged ions. This point represents the transition from a gas, a cloud of neutral particles, to a plasma, a cloud containing many charged particles.

Electricity can tear up gas molecules and make a plasma more easily than heat can, which is the key to St. Elmo's fire. During a storm, friction builds up extra electrons in certain parts of clouds, generating powerful electric fields that reach the ground. A strong enough field can theoretically break air down into a plasma anywhere, but in practice, sharp points (such as the mast of a ship) tend to concentrate the field, stripping electrons from atoms to leave behind charged ions in especially high numbers near sharp places.

Once the air around a mast has partially transformed into a plasma, St. Elmo's fire shines via a process called corona discharge. As the electric field slings electrons around, they knock into neutral particles and agitate those neutral particles into a more energetic state.

Imagine "some bully going through the schoolyard kicking all the kids," said Kristina Lynch, a plasma physicist at Dartmouth College in New Hampshire. "They get all excited, and then they have to relax." To cool down, the excited particles emit a photon of light with a particular energy and color. For nitrogen and oxygen, which dominate in Earth's atmosphere, that burst of light burns blue and violet, respectively.

While St. Elmo's fire tends to take place in stormy conditions, it's a distinct phenomenon from lightning. A lightning bolt’s glow contains blue and purple for the same reason, but it also shines white — a mixture of many colors — as it heats the air around it.

The colorful lights of the aurora get their glow from relaxing particles as well, although the electrons that excite these particles ultimately get their energy from the solar wind, rather than electrically charged clouds. Many also confuse St. Elmo's fire with ball lightning, another incandescent phenomenon known for millennia. While those hovering spheres of light remain poorly understood, the two events have been reported together, as in this mountaineer's account from 1977, reported in the Journal of Scientific Exploration:

"Just under me, there was a dilapidated building. I could see still tongues of light-blue flame on every point of steel framework which protruded from the ruins. The flame was of various sizes. The higher was the point, the larger was a tongue of flame on it. Still lower, at a height of 4,000 to 4,100 m [1,300 to 1,350 feet], lightning was flashing. Orange balls of the size of a soccer ball were flying by the wind on the background of black clouds."

Fortunately for hikers and sailors, St. Elmo's fire doesn't burn or present any immediate danger beyond the potentially stormy weather itself.

Engineers, however, must take corona discharge into account when designing electrical equipment, particularly power lines, as unwanted instances of St. Elmo's fire can sap valuable electricity. To minimize that effect, many long-distance power lines feature hoop-like "corona rings" around pointy areas such as the tips of towers and poles. These rings keep the electric field from getting concentrated enough to produce a lot of plasma.

In other cases, engineers have found ways to use corona discharge to their advantage. The process is involved in the production of ozone, an industrial disinfectant. Corona discharge also plays a role in creating the charged surfaces needed inside a photocopier.

While researchers have demystified the phenomenon and put it to work in modern technology, the harmless but captivating glow of St. Elmo’s fire still has the power to astonish bystanders, just as it has for millenia.