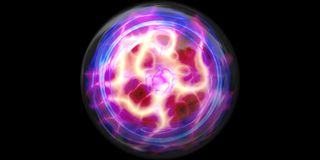 Witnesses describe ball lightning as fist-size floating spheres of fire that spin, hover in mid-air and sometimes explode. But despite accounts stretching back hundreds of years, scientists still aren't sure what causes this spooky phenomenon or even if it truly exists. One of the earliest documented reports of ball lightning came from the events of a stormy Sunday in 1638. A parish church in Devonshire, England went up in flames and some of the people inside were killed. Since then, there have been thousands of reported sightings of ball lightning. These mysterious orbs have been seen floating around outdoors, in buildings and even on ships and airplanes. Contemporary accounts tend to be less dramatic than the parish church tale: In general, the worst damage is some singed clothing or furniture. Perhaps the strongest evidence for ball lightning's existence is that scientists may have recreated it or something very much like it in a lab. In a study published in the journal Physical Review Letters in 2007, researchers at the Federal University of Pernambuco in Brazil reported using electricity to vaporize tiny wafers of silicon. The result was blue- or orange-white spheres the size of ping-pong balls that hovered around for as long as eight seconds. The result gave credence to the theory that ball lightning is the result of a lightning strike on silica-rich soil. The vaporized silica, the theory goes, condenses into nanoparticles and is bound together by electrical charges. It glows hot as because of a chemical reaction between the silicon and oxygen in the air. But this theory doesn't explain all reported ball lightning sightings, such as those on airplanes. Other researchers have floated theories for ball lightning ranging from miniature black holes left over from the Big Bang to visual hallucinations caused by epileptic seizures, but the silica theory remains the only lab-tested hypothesis. Out in the real world, these rings of fire remain a mystery best suited for dark and stormy nights.