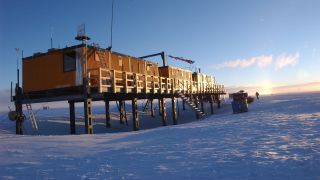 Cosmic dust found in Antarctic snow was likely birthed in a distant supernova millions of years ago. The dust's interstellar journey eventually brought the material to Earth, where scientists discovered the ancient grains.

This dust stood out because it contains an iron isotope called iron-60, which is commonly released by supernovas but very rare on Earth. (Isotopes are versions of elements that differ in the numbers of neutrons in their atoms.)

In the search for elusive space dust, scientists analyzed more than 1,100 lbs. (500 kilograms) of surface snow that they gathered from a high-altitude region of Antarctica near the German Kohnen Station. In that location, the snow would be mostly free of contamination from terrestrial dust, the researchers reported in a new study.

The investigators then sent the still-frozen snow to a lab in Munich, where it was melted and filtered to isolate dust particles that could contain traces of material from space. When the scientists examined the incinerated dust using an accelerator mass spectrometer, they detected the rare iron-60 isotope — a relic of an ancient supernova.

Space is a dusty place, rich with particles expelled by supernovas and shed from planets, asteroids and comets. Our solar system is currently passing through a large cloud of space dust known as the Local Interstellar Cloud (LIC), and grains from this cloud found on Earth could reveal much about how our sun and its planets interact with cosmic dust.

To find out if the space dust came from a distant supernova, the scientists first had to rule out whether it originated within our solar system. Irradiated dust shed by planets and other bodies can hold iron-60, but exposure to cosmic radiation also creates another isotope: manganese-53. The researchers compared ratios of iron-60 and manganese-53 in the Antarctic grains, finding that the quantity of manganese was much lower than it would have been if the dust were local.

How did the scientists know that the iron-60 in the Antarctic snow didn't originate on Earth? There may have been iron-60 on our planet during its infancy, but all of this rare isotope has long since decayed on Earth, the researchers wrote in the study. Nuclear bomb tests could have created and dispersed iron-60 across the planet, but calculations showed that the quantity of the isotope produced by such tests would have been much lower than the amount of iron-60 found in Antarctica's snow.

Iron-60 is also produced in nuclear reactors; however, the amount of the isotope that reactors generate is "insignificant" and is confined to the reactors where it is made, the scientists said. To date, even serious nuclear accidents, such as the Fukushima Daiichi nuclear power plant disaster in 2011, didn't introduce iron-60 to the environment in measurable quantities, according to the study.

Previously, iron-60 on Earth has been found only in ancient deep-sea deposits or in rocks that originated in space, "like meteorites or on the moon," the scientists reported online Aug. 12 in the journal Physical Review Letters.

"By ruling out terrestrial and cosmogenic sources [shaped by cosmic rays], we conclude that we have found, for the first time, recent iron-60 with interstellar origin in Antarctica," the researchers wrote.