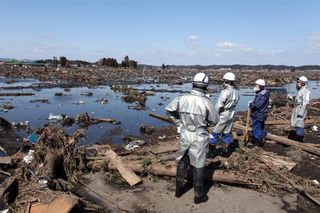 Rescue workers look over the area flooded by the tsunami on March 12, 2011 in Minamisoma, Fukushima, Japan.
(Image: © Sankei/Getty)

It's been seven years since a magnitude-8.9 earthquake in northeastern Japan triggered a massive tsunami that led to a meltdown at the Fukushima Daiichi Nuclear Power Plant. Seven years since radioactive materials from the plant poured into the air and the ocean and began making its way toward the West Coast of the United States.

The U.S. and Canadian coastal waters in the Pacific are contaminated, analyses show, but radiation levels are still well below federal standards set by the Environmental Protection Agency, said Ken Buesseler, a senior scientist at the Woods Hole Oceanographic Institution in Woods Hole, Massachusetts. [Japan Earthquake & Tsunami of 2011: Facts and Information]

The levels are so low, that swimming eight hours every day for a year would only increase a person's annual dose of radiation to an amount that is 1,000 times less than a single dental X-ray, Buesseler said.

"It's a very small risk that I consider negligible," Buesseler told Live Science. "I'll go swimming in those waters. I will eat seafood from those waters without any concern."

But it's understandable that some people have health-related concerns about the radiation from the Fukushima power plant, said Punam Thakur, a senior scientist of radiochemistry at the Carlsbad Environmental Monitoring & Research Center, an entity of New Mexico State University.

Part of this fear likely stems from the fact that radiation is invisible and odorless, and exposure to high levels of it can increase the risk of life-threatening cancers, Thakur said. Anxiety caused by this fear could probably be eased by increased communication between scientists and the public, Thakur added.

"It goes back to 1945," Thakur told Live Science. "Nuclear industries have not been very open to the public, if you look back into the history." But now that data is more readily available, as scientists like Buesseler, Thakur and their colleagues publish their research, perhaps people will be less fearful, she said.

During the Fukushima disaster, the plant released airborne and ocean-bound radioactive materials.

The air-bound emissions — which began on March 12 and hit the west coast of North America three days later, according to a computer model — included iodine-131 (which has a half-life of eight days, meaning half of it has decayed in this period), cesium-134 (2.1 years) and cesium-137 (30.1 years), as well as trace levels of tellurium (3.2 days) and iodine-132 (2.3 hours), according to a paper that Thakur co-wrote in 2012 in the Journal of Environmental Monitoring.

Nine days after the accident, the radioactive cloud had crossed North America, the researchers wrote in the study. During this time, low levels of Fukushima radionuclides were detected in samples of rain and drinking water, grass and milk, the researchers noted.

However, "it is important to note that all of the radiation levels detected across the United States have been very low, well below any level of public and environmental concern," they wrote.

Radioactive levels dropped from April to May 2011, largely because most of the material had such short half-lives, the researchers wrote. For instance, with a half-life of eight days, iodine-131 is basically "dead" after 10 half-lives, or 80 days, Thakur said. Some tests found no detectable Fukushima-related radionuclides after May 2011, the researchers said. [Fukushima Radiation Leak: 5 Things You Should Know - Live Science]

As for cesium-134, which has a half-life of 2.1 years, "it appeared for a few weeks after the event, but nowadays it's not there," Thakur said. "It's gone because the amount was so small." She added that because seven years have passed, "I would be really surprised if anybody in the whole U.S. can see [cesium-] 134 in the air."

At 30.1 years, cesium-137 has the longest half-life of the bunch, but it's important to put it in context, Thakur said. The United States already has cesium-137 in the environment because it was testing nuclear weapons in the 1950s and 1960s.

The cesium-137 from Fukushima issmall compared with the radionuclides left over from the 1950s and 1960s, Thakur said.

"Whatever we have measured [of cesium-137] from Fukushima, it is a very small amount, is not going to harm anybody," she said.

Researchers focused on cesium when testing ocean contamination "because it was one of the most abundant radioactive contaminants released, and some forms of it can remain in the environment for decades," Buesseler and his colleagues wrote on ourradioactiveocean.org.

With the help of citizen scientists and researchers, Buesseler's team has tracked the spread of cesium in the Pacific since 2011.

Though small, cesium levels along the North American coast continue to grow as offshore waters that have higher cesium levels move onshore. Models predicted that these levels should have already peaked, "but it looks like this may take another year or more [before] these levels decline along the beaches," Buesseler said.

A research group in Canada has found similarly low levels of cesium-137 in fish. The group — the Integrated Fukushima Ocean Radionuclide Monitoring (InFORM) network includes academic, government, non-governmental organizations and citizen scientists working to acquire data, according to its website.

Tests on salmon in 2016 show that the maximum contamination of cesium-137 found in a fish was more than 1,700 times lower than the Health Canada Action Level, and "is not known to be a health risk for either humans or the environment," InFORM wrote on its website.

Scientists aren't sure exactly how long it will take radionuclides in the ocean to return to pre-Fukushima levels, but it will probably be on the order of years, not decades, Buesseler said. In the meantime, researchers will continue to monitor these levels, especially because it teaches them how these molecules move around the planet, he said. [Timeline of Events at Japan's Fukushima Nuclear Reactors]

"The world operates 400 nuclear power plants and many of those are on coastlines or rivers," Buesseler said. "[This data will help us] know to a little better what is coming our way in case these accidents happen."