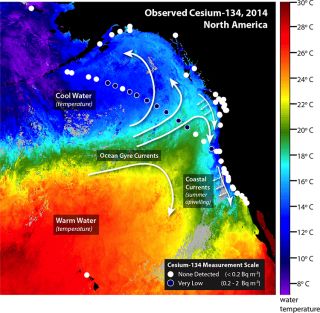 In seawater collected about 100 miles (161 kilometers) offshore of Eureka, the amount of cesium-134 was 2 Becquerels per cubic meter of water (a unit of measure based on the number of radioactive decay events per second per 260 gallons of water). That's about 1,000 times lower than the drinking water limit set by the U.S. Environmental Protection Agency.

This level of radioactivity does not represent a health hazard for people who want to fish or swim in the area, said Ken Buesseler, a marine chemist at the Woods Hole Oceanographic Institution in Massachusetts, who helped analyze the seawater. Buesseler is leading a crowdfunded citizen science program to track cesium levels from the meltdown by collecting water samples along the U.S. and Canadian West Coast.

A swimmer who spent 6 hours every day for a year in water with 10 Becquerels per cubic meter of cesium-134 would still receive 1,000 times less radiation than the dose from a single dental X-ray, Buesseler said. "Now, we have measurements that confirm that for human health, when a mother from Santa Cruz calls me and asks if it's safe for my son to go surfing, we have far fewer concerns," he said.

To date, no cesium-134 has been found at Canadian or U.S. beaches, including those in Hawaii, Alaska, Washington, Oregon and California. The short-lived isotope has only been detected offshore.

Cesium-134 does not occur on its own in nature — only forming in nuclear reactors — and it has a short two-year half-life. These qualities make cesium-134 an ideal tracer of the pollution from the Fukushima Daiichi nuclear power plant meltdown following the 2011 Japan earthquake and tsunami. [Fukushima Radiation Leak: 5 Things You Should Know]

The new results also support fish sampling results from the Food and Drug Administration, Buesseler said. To date, the FDA has not detected radioactive iodine or cesium in fish caught in the North Pacific and Alaska waters, where currents carry the Fukushima pollution.

It's possible that cold currents that upwell along the West Coast, especially along California, may keep the eastward-flowing cesium-134 from reaching beaches for several more months, but researchers need more data to confirm this idea.

"It's not a public health threat, but those last 100 miles are pretty tricky," Buesseler said.

It costs about $550 to $600 to test each sample at Buesseler's lab. No federal or state research agencies have stepped in to help offset the costs, so public fundraising pays for the analyses.

The latest samples were collected on donated time during a research cruise from Dutch Harbor, Alaska, to Eureka, California, by the Moss Landing Marine Laboratories in California. LUSH Cosmetics donated $12,000 to test 24 water samples, but another 20 or so samples are still sitting, waiting for someone to underwrite the cost.

Buesseler will present the findings Thursday (Nov. 13) at the Society of Environmental Toxicology and Chemistry's annual meeting in Vancouver, British Columbia.