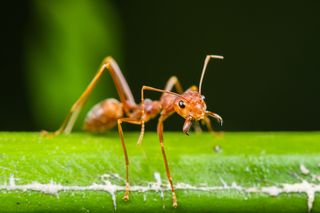 Not all ants are annoying pests. Of the more than 12,000 different species, many play a vital role in the ecosystem.
(Image: © Shutterstock)

Ants are a diverse group of insects well known for their ability to ruin picnics and invade kitchens. But out of the more than 12,000 different species of ants, there are many that play a vital role in ecosystem health.

Ants belong to the insect family of Formicidae, within the order of Hymenoptera — the same order that includes wasps and bees. Although they're nearly ubiquitous now, ants were scarce compared to other insects when they first appeared on Earth between 140 million and 168 million years ago, according to The Field Museum. As flowering plants became more common, they provided new food sources for ants, which likely facilitated the insects' movement into new habitats.

Today, ants live pretty much everywhere, except Antarctica. They're the most dominant insect on Earth and scientists estimate that there are maybe another 10,000 species of ants left to discover.

Related: 7 Insects You'll Be Eating in the Future

Ants are invertebrate insects with bodies that are divided into three main parts: head, thorax (where the three pairs of legs are attached) and abdomen (where the vital organs are located), according to Harvard University's Harvard Forest department. The ant's body is supported and shielded by a waterproof exoskeleton made of chitin, a hard fibrous substance. The two antennae on either side of the head serve as the ant's main sensory organs. Ants also have a pair of compound eyes that consist of many photoreceptors that allow them to see light and shadows. However, their eyesight is poor, and ants rely primarily on their sense of smell for understanding their environment.

These hardy insects use a variety of pheromones, or chemical compounds, to communicate, according to a 2015 study published in the journal Scientific Reports. The ants produce pheromone trails that lead their fellow colony members to food or a nest, or to alert them to danger. Sensory receptors, mainly located in the antennae, can detect the differences in each type of trail or signal so the ant can respond accordingly.

Ants also have powerful mandibles that allow them to bite and cut through materials as well as carry heavy objects that are at least 10 times greater than their body weight, according to Harvard Forest.

Ant species range in size from about 0.03 to 1.18 inches (1 to 30 millimeters), with the majority of species between 0.19 to 0.59 inches (5 and 15 mm) in length, according to the University of Michigan. The queen is the largest ant in the colony and lives the longest (several years). Males, on the other hand, are the smallest ants in the colony and typically live for only a few weeks. Worker ants, or non-queen female ants, can live up to a year.

How do ants reproduce?

Male and young queen ants have wings, and they mate while flying, according to the Royal Society of Biology. Mating occurs in the summer when the conditions are warm and humid. Male ants die within a day or two after mating, while the young queens lose their wings and walk or dig to find a new nest. Queens are the only ants that lay eggs, and can live at least another 10 years in the safety of their nests, laying eggs for most of that time.

Queens produce eggs that will become males and young queens only when it is time for new colonies to be formed, according to a 2004 study published in the journal Current Biology. After mating, the males will die, while the new queens will select a nest site to begin building their new colony.

Ant colonies are often found underground, under rocks, in mounds or in trees, according to National Geographic. Some species create nests in wood, which can damage structures. A few others are more nomadic and don't have permanent homes. Colonies can range from just a few dozen members to over a million, according to the Australian Museum.

Most ant colonies contain a queen, workers (the adult daughters of the queen) and the young females who will eventually become workers, according to Arizona State University. Male ants don't do much except reproduce and are typically only around when needed for that purpose. Every ant has a job and contributes to the health of the colony. The queen lays eggs for nearly her entire life, the workers gather food and protect the colony and the young daughters care for the queen, eggs and larvae.

Some colonies contain more than one queen, which eventually leads to competition and murder of other queens (by both queens and the loyal worker ants) until only one, or sometimes none, remain.

What do ants eat?

Why ants are important

Around the world, ants play a role in keeping their local ecosystems healthy. For example, ants play a huge role in tropical rainforests by redistributing nutrients, according to a 2017 article published in the Journal of Animal Ecology. The authors estimated that more than half of the nutrient redistribution in the tropical rainforest of the Maliau Basin Conservation Area in Malaysia was performed by ants.

Ants also help turn and aerate the soil as they dig their tunnels, according to Iowa State University. This allows water, oxygen and minerals to better reach plant roots, allowing them to thrive. Ants also work as nature's gardeners by spreading seeds and fertilizing soil with nutrients from dead insects, animals and plants.