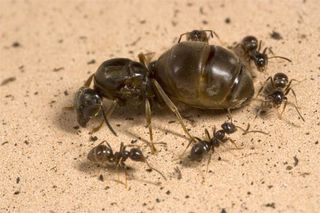 Worker ants typically tend to the needs of their queen, which is the fertile one of the bunch.
(Image: © David Nash/University of Copenhagen.)

A mighty struggle for ultimate power, with calls of "death to the queen" answered by armies of workers, is routine in some ant colonies. Queen ants are therefore sometimes forced to take care of themselves rather than look out for the good of their colonies, a new study suggests.

Queen ants will do whatever it takes to be the last one standing, even if it means producing fewer young workers to the detriment of the collective.

Ant colonies work somewhat like a superorganism, with the queen ant producing little workers that will meet her needs and their siblings' needs. But there is always give and take, with individual survival sometimes trumping the good of the group, the research found.

Often, an ant colony has more than one queen. The upside: Multiple queens, each raising broods of worker ants, can produce a larger initial workforce in new colonies, increasing the chance the colony will survive the first year. But queen ants don't merrily cohabit forever. Soon after the young workers hatch, the little ones begin to slaughter surplus queens until only one remains.

The outcome: death to all but one queen, and sometimes all the queens.

"Workers are much smaller and do minimal damage alone, so it can take several days of sustaining biting/acid spraying before they bring her down – perhaps she just dies of thirst," Luke Holman, of the University of Copenhagen's Center for Social Evolution, told LiveScience. "Usually they stop when one is left, but occasionally they are so revved up that they kill all the queens."

That's basically evolutionary suicide, he added, since workers are typically sterile and rely on the queen to pass on their genes.

The researchers found queen ants have figured out a clever way of staying on top: They produce fewer workers when other queens are around, because productivity comes at a cost. Producing a larger brood zaps energy from the queen, leaving her with less fighting power to defend against murderous worker ants.

Here's how the ant battle played out in the lab: Queen ants that had recently mated were housed in plaster nests in a lab, either alone or in groups of two or three queens. Once the eggs were laid and had entered the cocoon stage (just before reaching adulthood), the researchers either snatched some cocoons away or added more to nests.

Queens produce fewer workers when sharing the colony with other queens, especially if the colony already has many developing workers. In the study, compared with the equivalent colonies that had no cocoon transferring, those that had their broods increased were 25 percent less productive, while colonies in which cocoons were taken away were 18 percent more productive.

The worker ants weren't fooled, however, as they could sniff out a selfish queen, the researchers found. The queens that were most fertile had the stronger chemical cues (and thus stronger odors), which made them more likely to be spared execution by workers.

"Execution of the most selfish ant queens by workers would increase the incentive for queens to be team-players that work hard to help the colony," Holman said. "This rudimentary 'legal system' could have helped ants to evolve their highly advanced societies, just as in humans."

The study was published Feb. 24 in the journal Proceedings of the Royal Society B.