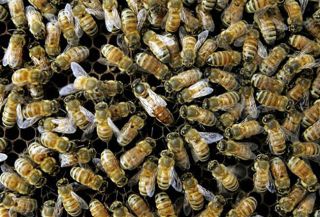 Insect colonies, although composed of many critters, function in a manner similar to individual organisms, according to a new study. The results suggest that these colonies act like "superorganisms," at least in terms of their basic physiology.

Many insect species, including ants and bees, work together in colonies, and their cooperative behavior determines the survival of the entire group. This type of interaction has been likened to that of a single organism, with each individual in a colony acting like a cell in the body, giving rise to the term "superorganism."

However, although this phrase has been around for at least a century, it has generally been used as a metaphor, and very few, if any, studies have quantitatively compared whole colonies to individual organisms, said study researcher James Gillooly of the University of Florida.

So this study marks the first for a quantitative assessment of the link between social colonies and a single organism, Gillooly said. The results could also explain some anomalies found in some social insects, such as why a queen bee lives much longer than her size would dictate. The answer: The queen acts as one part of a much larger machine.

One scientist isn't sold, however, saying the research is theoretical and may not hold up in real life.

Gillooly and his colleagues took mathematical equations that are typically used to describe the physiology and life cycle of a single organism, and applied them to whole colonies. These equations, known as the "metabolic scaling theory," predict the rates of growth, reproduction, lifespan, and many other factors for individual organisms based on that creature's size. The researchers used data from 168 different social insect species, including ants, termites, bees and wasps.

They found that whole colonies "are constrained in much the same way and follow many of the same so-called biological rules," as individual organisms, Gillooly told LiveScience.  In other words, the colonies were functioning like superorganisms.

"It suggests that these whole societies are functionally organized and are using and expending energy for the basic processes of life in much the same way that [individuals] are," Gillooly said.

They also saw that factors that might have seemed exceptional for individual organisms in a colony, such as remarkable survival and growth rate, were not that exceptional when looked at from the perspective of a superorganism, Gillooly said.

For example, the queen ant in a colony can live for 20 or 30 years, and that appears exceptional for its body size. But if you think of the queen as the ovary of a single organism, and the other ants as the rest of the body, then the queen's lifespan is about what you would expect, Gillooly said.

While scientist know a lot about how cells in a body work together to carry out the biological processes in a single organism, the new findings reveal information about how the cooperative behavior of colonies can affect the physiology, or biological functioning, of the group, Gillooly said.

"What this tells us is how the highly structured, highly cooperative behavior of colonies affects the basic physiology and life history of a colony," Gillooly said.

The study "is notable for its originality and also for its importance," said Edward O. Wilson, a professor of biology at Harvard University and co-author of the book "The Superorganism" (W. W. Norton & Company, 2008). "The research certainly adds a new perspective to our study of how insect societies are organized and to what degree they are organized," said Wilson, who was not involved in the current research.

However, some scientist feel that the analysis may be too theoretical in its methods, and the results may not actually apply to the real world. For instance, the study lumps all social insects together even though many of these critters show degrees of sociality, said Jerome Rozen, a curator at the American Museum of Natural History who studies solitary bees.

"Their approach is a valid approach, it's just that it doesn't conform to reality, and they're not taking a specific animal and seeing how this works," Rozen said in a telephone interview. "I would like to see if they would get the same answers if they had a real animal there."

The study was a collaboration between Gillooly, Hannah B. Vander Zanden, and Chen Hou of the University of Florida, and Michael Kaspari of the University of Oklahoma. The results will be published this week in the journal  Proceedings of the National Academy of Sciences.