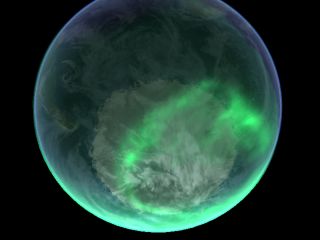 An aurora over the south pole, captured by NASA's IMAGE spacecraft in 2004.
(Image: © NASA/UC Berkeley)

A dense layer of molecules and electrically charged particles, called the ionosphere, hangs in the Earth's upper atmosphere starting at about 35 miles (60 kilometers) above the planet's surface and stretching out beyond 620 miles (1,000 km). Solar radiation coming from above buffets particles suspended in the atmospheric layer. Radio signals from below bounce off the ionosphere back to instruments on the ground. Where the ionosphere overlaps with magnetic fields, the sky erupts in brilliant light displays that are incredible to behold.

Where is the ionosphere?

Extreme ultraviolet radiation and X-rays from the sun bombard these upper regions of the atmosphere, striking the atoms and molecules held within those layers. The powerful radiation dislodges negatively charged electrons from the particles, altering those particles' electrical charge. The resulting cloud of free electrons and charged particles, called ions, led to the name "ionosphere." The ionized gas, or plasma, mixes with the denser, neutral atmosphere.

Explosive solar flares and gusts of solar wind stir up sudden changes in the ionosphere, teaming up with high-altitude winds and severe weather systems brewing on the Earth below.

Light up the skies

The scorching-hot surface of the sun expels streams of highly charged particles, and these streams are known as solar wind. According to NASA's Marshall Space Flight Center, solar wind flies through space at about 25 miles (40 km) per second. Upon reaching the Earth's magnetic field and the ionosphere below, solar winds set off a colorful chemical reaction in the night sky called an aurora.

When solar winds whip across Earth, the planet stays shielded behind its magnetic field, also known as the magnetosphere. Generated by churning molten iron in the Earth's core, the magnetosphere sends solar radiation racing toward either pole. There, the charged particles collide with chemicals swirling in the ionosphere, generating the spellbinding auroras.

Scientists have found that the sun's own magnetic field squishes the Earth's weaker one, shifting auroras toward the night side of the planet, as reported by Popular Mechanics.

Near the Arctic and Antarctic circles, auroras streak across the sky every night, according to National Geographic. The colorful curtains of light, known as the aurora borealis and aurora australis, respectively, hang about 620 miles (1,000 km) above the Earth's surface. The auroras glow green-yellow when ions strike oxygen particles in the lower ionosphere. Reddish light often blooms along the auroras' edges, and purples and blues also appear in the nighttime sky, though this happens rarely.

"The cause of aurora is somewhat known, but it is not entirely resolved," said Toshi Nishimura, a geophysicist at Boston University. "For example, what causes a particular type of color of aurora, such as purple, is still a mystery."

Beyond auroras, the ionosphere also plays host to other impressive light shows.

In 2016, citizen scientists spotted a particularly eye-catching phenomena, which scientists struggled to explain, Live Science sister-site Space.com previously reported. Bright rivers of white and pinkish light flowed over Canada, which is farther south than most auroras appear. Occasionally, dashes of green joined the mix. The mysterious lights were named Steve in homage to the animated movie "Over the Hedge" and were later rebranded as the "Strong Thermal Emission Velocity Enhancement" ⁠— still STEVE for short.

"We've been studying the aurora for hundreds of years, and we couldn't, and still can't, explain what Steve is," said Gareth Perry, a space weather scientist at the New Jersey Institute of Technology. "It's interesting because its emissions and properties are unlike anything else we observe, at least with optics, in the ionosphere."

According to a 2019 study in the journal Geophysical Research Letters, the green streaks within STEVE may develop similarly to how traditional auroras form, as charged particles rain down upon the atmosphere. In STEVE, however, the river of light seems to glow when particles within the ionosphere collide and generate heat among themselves.

Though reactions in the ionosphere paint the sky with brilliant hues, they can also disrupt radio signals, interfere with navigational systems and sometimes cause widespread power blackouts.

The ionosphere reflects radio transmissions below 10 megahertz, allowing the military, airlines and scientists to link radar and communication systems over long distances. These systems work best when the ionosphere is smooth, like a mirror, but they can be disrupted by irregularities in the plasma. GPS transmissions pass through the ionosphere and therefore bear the same vulnerabilities.

"During large geomagnetic storms, or space weather events, currents [in the ionosphere] can induce other currents in the ground, electrical grids, pipelines, etc. and wreak havoc," Perry said. One such solar storm caused the famous Quebec blackout of 1989. "Thirty years later, our electrical systems are still vulnerable to such events."

Scientists study the ionosphere using radars, cameras, satellite-bound instruments and computer models to better understand the region's physical and chemical dynamics. Armed with this knowledge, they hope to better predict disruptions in the ionosphere and prevent problems that can cause on the ground below.