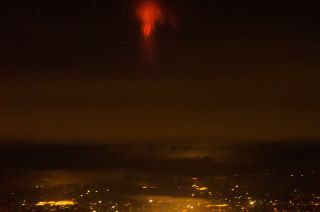 Sprites form at irregularities in the plasma, or charged particles of gas, in the ionosphere, the layer just above the dense lower atmosphere, about 37 to 56 miles (60 to 90 kilometers) above the Earth's surface, a study found. Since disturbances in the ionosphere can affect radio communication, sprites could be useful for sensing such disturbances remotely, researchers say.

"We would like to know how sprites are initiated and how they develop," Victor Pasko, an electrical engineer at Penn State and author of the study published May 7 in the journal Nature Communications, said in a statement. [Images: Red Sprite Lightning Revealed in Stunning Photos]

Sprites are large electrical discharges that occur above thunderstorms. They resemble reddish-orange jellyfish with bluish tentacles streaming down.

But while sprites require thunderstorms, not all thunderstorms produce sprites. Recent studies suggested that ionosphere irregularities were required for these ghostly flashes to occur, but evidence for them was lacking.

In the study, Pasko and his colleagues studied high-speed video of sprites, and developed a model for how the strange lightning evolves and disappears. They used the model to try to recreate sprite-forming conditions.

Analysis of the videos showed that streamers snake downward from the sprites much more quickly than they spread horizontally, suggesting plasma irregularities were driving the streamer spread.

To study sprite dynamics, the team used a two-dimensional mathematical model of the movement of charged particles in the sprite. They used the model to recreate how sprites are formed, using it to see how the streamers originated and how large the plasma irregularities were.

Alternatively, meteors could cause irregularities as they move through the upper regions of the ionosphere, before burning up in the lower atmosphere due to friction.

The high-speed videos and models could be useful to do remote sensing of the ionosphere, to understand how natural phenomena impact long-range radio communication, the researchers said.