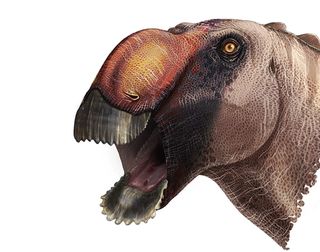 A newfound duck-billed dinosaur species that lived about 80 million years ago had a face so bizarre that scientists named the animal "eagle-nose shovel-chin." Its jaws resembled a pair of gardening tools, with wavy ridges along the edges in a "W" shape. An arching crest in the middle of its face was curved like the majestic beak of an eagle, giving the dinosaur's profile the appearance of a prominent, humped nose.

Scientists found the unusual fossil skull and a partial skeleton of the animal in the 1980s in Big Bend National Park, a site in southwestern Texas, though the specimen was not analyzed in detail until recently.

The duck-billed weirdo shared some features in common with other duck-billed and crested dinosaurs, the group Saurolophidae, but it was more primitive, offering intriguing new clues about how the group's trademark crests evolved, scientists reported in a new study. [Image Gallery: 25 Amazing Ancient Beasts]

Some dinosaurs' scientific names invoke a sense of drama: Think of Tyrannosaurus rex ("tyrant lizard king") or Velociraptor ("swift thief"). In this case, the researchers couldn't resist calling out the dinosaur's bizarre face. The genus name "Aquilarhinus" combines the Latin word "aquila," for "eagle," and the Greek word "rhinos," which means "nose." The species name "palimentus" comes from the Latin words for "shovel" and "chin," according to the study.

All known dinosaurs in this group (also called hadrosaurids) have beak-like jaws that expand at the end into a scoop shape, "hence the nickname 'duck-billed' dinosaurs," said lead study author Albert Prieto-Márquez, a researcher with the Catalan Institute of Palaeontology Miquel Crusafont in Barcelona, Spain.

"However, they differ from Aquilarhinus in that this 'scoop' is all concave. In contrast, in Aquilarhinus, there was a rise, a convex relief at the center of the 'scoop,'" Prieto-Márquez told Live Science in an email.

That ridged, scooping chin likely came in handy millions of years ago; what is now a dry and rocky landscape in Texas was back then a coastal swamp or marsh. Aquilarhinus probably used its peculiar jaws to scoop vegetation from the bottom of a muddy creek bed, the researchers wrote.

However, it's less clear what the dinosaur's prominent nasal crest was for, though it may have been used as a display to help the dinosaurs recognize members of their own kind and compete for mates, Prieto-Márquez said.

"The crest of Aquilarhinus is simpler in structure than that of most other hadrosaurids, except members of kritosaurini (a subgroup of hadrosaurids)," he explained. "In both Aquilarhinus and kritosaurins for which the crest is known, this is just a fold of the nasal bone, giving them a Roman nose appearance."

Decades earlier, other scientists who examined the dinosaur's skull thought that the nasal crest resembled that of another hadrosaurid, Gryposaurus. But despite the superficial similarities, Aquilarhinus proved to be a more primitive hadrosaurid than Gryposaurus, taking up a position at the very base of the group's family tree. This hinted that the diverse shapes of hadrosaurid cranial crests all stemmed from a structure that began as a simple arched nose, Prieto-Márquez said.

Aquilarhinus, aka eagle-nose shovel-chin, also provides a missing puzzle piece concerning where hadrosaurids may have originated. These dinosaurs were common across Europe, Asia, North and South America, and Antarctica during the latter part of the Cretaceous period (145.5 million to 65 million years ago), and the appearance of this primitive specimen supports an increasingly popular hypothesis that hadrosaurids first appeared in the southern part of North America, the study authors said.

The findings were published online July 12 in the Journal of Systematic Palaeontology.