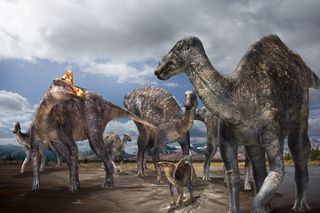 Unlike some hadrosaurs, the newfound duck-billed dinosaur wore a crest on its head.
(Image: © Illustration by Masato Hattori)

Some 69 million years ago, the Arctic was a relatively warm, forested place, home to roaming herds of duck-billed dinosaurs, feathered raptor-like theropods and even members of the tyrannosaur family.

"This new discovery illustrates the geographic link between lambeosaurines of North America and the Far East," study leader Ryuji Takasaki, a paleontologist from Hokkaido University in Japan, said in a statement. "Hopefully, further work in Alaska will reveal how closely the dinosaurs of Asia and North America are connected." [Image Gallery: 25 Amazing Ancient Beasts]

The new fossil is in the collection of the Perot Museum of Nature and Science in Dallas, Texas. It consists of a chunk of skull from a single dinosaur, found in the Liscomb Bonebed in the remote North Slope of Alaska. The fossils in this bone bed date to approximately 69 million years ago, and more than 6,000 bones and bone fragments have been found there.

The vast majority of the bones belong to hadrosaurines, duck-billed dinosaurs that are often found along coastal flats or river deltas. That's what the Liscomb Bonebed area was in the Cretaceous. The new fossil, though, has skull features that don't match the hadrosaur group. Instead, the skull fits in with a group called the lambeosaurines, which are distinguished by the hollow crests on the tops of their heads.

The skull fragment has strong bone protuberances seen only on lambeosaurines, the researchers reported March 29 in the journal Scientific Reports. The skull was also shorter than a hadrosaurine skull.

Previously, the northernmost lambeosaurines came from southern Alberta, in Canada, the researchers wrote. The new find hints that Arctic populations were similar to those farther south.

The fact that only one lambeosaurine skull has been found in the Liscomb Bonebed might indicate that lambeosaurines, unlike hadrosaurines, didn't gather in coastal areas, the researchers wrote. Lambeosaurines elsewhere in North America and Asia are typically found in inland environments, so there may have been fewer of these crested duck-bills near the ancient coastline in Alaska.