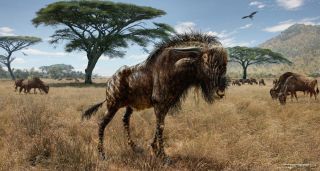 An illustration of the Late Pleistocene beast Rusingoryx atopocranion, which curiously has the same type of hollow-dome crest as the duck-billed dinosaur.
(Image: © Todd S. Marshall | http://www.marshalls-art.com)

Duck-billed dinosaurs and an ancient wildebeest-like animal lived tens of millions of years apart, but they have strikingly similar, peculiar noses, a new study finds.

Both creatures sported a trumpetlike nasal passage that extended to the tops of the animals' heads and may have served as resonance chambers to help them communicate, the researchers found.

The nose-y similarity is "a spectacular example" of convergent evolution, a process in which unrelated animals develop the same features because those traits are evolutionarily advantageous, the researchers said. [Image Gallery: 25 Amazing Ancient Beasts]

"The nasal dome is a completely new structure for mammals — it doesn't look like anything you could see in an animal that's alive today," Haley O'Brien, a doctoral student of paleophysiology at Ohio University in Athens, said in a statement. "The closest example would be [duck-billed] hadrosaur dinosaurs with half-circle–shaped crests that enclose the nasal passages themselves."

The idea for the study surfaced in 2009, when study co-author J. Tyler Faith, a lecturer in archaeology at the University of Queensland in Australia, and his colleagues were investigating a fossil site at Bovid Hill near Lake Victoria in Kenya. The site is known for its myriad bovid fossils, including the unusual species Rusingoryx atopocranion, a hoofed mammal that lived during the Late Pleistocene (a period lasting from 2.6 million to 11,700 years ago).

Little is known about R. atopocranion, which was identified as a new species at the same site in 1983. However, after returning to Bovid Hill for several years, the researchers realized they were likely "dealing with an entire herd that was somehow wiped out and buried at the site," Faith said.

Several clues explained the vast number of bodies. The researchers found stone tools and butchered bones at the site, suggesting that early modern humans had hunted the mammals. The scientists scoured the hill for skeletons, and found several intact skulls of the beasts, before publishing the research findings in 2010.

"I was astonished to see that [the skulls] looked unlike any antelope that I had ever seen — the only thing more surprising would have been fossil zebras with horns growing from their heads." Faith said. "The anatomy was clearly remarkable."

Later, Faith and O'Brien studied the juvenile and adult fossil skulls in greater detail. Computer tomography (CT) scans revealed the inner structure of the bones, and the researchers said they immediately realized the animals' large, hollow nasal crests were comparable to the hadrosaur's long crests.

"We were expecting the inside of the dome to have something closer to normal mammalian anatomy, but once we took a look at the CT scans, we were pretty shocked," O'Brien said.

Perhaps both animals used their hollow nasal crests to deepen their vocal calls, the researchers said. The team developed an acoustical model of R. atopocranion's skull, and proposed that the animal would have been able to make noises very close to low-frequency infrasound. This method of vocalization would have allowed the beasts to communicate with the herd without alerting other nearby animals, such as predators, the researchers said. [Photos: Beastly Feasts: Amazing Photos of Animals and Their Prey]

In fact, both R. atopocranion and hadrosaurs were likely highly social, and may have communicated with their herds over fairly large distances, the researchers said.

"Vocalizations can alert predators, and moving their calls into a new frequency could have made communication safer," O'Brien said.

"On top of this, we know that Rusingoryx and hadrosaurs were consummate herbivores, each having their own highly specialized teeth," she added. "Their respective, remarkable dental specializations may have initiated changes in the lower jaw and cheekbones that ultimately led to the type of modification we see in the derived, crest-bearing forms."

The researchers said they plan to examine how R. atopocranion's body changed as the animal grew into adulthood. They also hope to discover why the once-thriving animal went extinct, they said.

Other researchers are studying hadrosaur sounds. One such dinosaur, Parasaurolophus, had a 7-foot-long (2.1 meters) nasal crest, which the animal might have used "kind of like a trombone," Terry Gates, a paleontologist at the North Carolina Museum of Natural Sciences, told Live Science in 2014.

The study was published online today (Feb. 4) in the journal Current Biology.